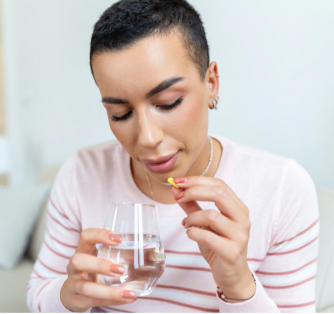 Antidepressants are one of the most effective and efficient treatment options for depression, anxiety, and other similar mental health conditions. Treatments in the antidepressant class are known for their profound effect on mental dispositions, but little light is shed on the other effects it has on the body. Over the years, studies have shown that anti-depressants have quite a significant effect on weight.

Below we take a better look at the effect antidepressants have on weight, more specifically, weight loss:

Before we dive into the effect antidepressants have on weight, let's get a general overview of what antidepressants are. Antidepressants are prescription psychiatric drugs that were created to provide depressed individuals with relief from symptoms that fuel the condition. Medications that are in this class also treat other conditions, such as:

Most treatments classified as antidepressants work by affecting neurotransmitters (chemicals in the brain) such as dopamine, serotonin, and norepinephrine. There are 5 primary classes of antidepressants, they are:

How do Antidepressants Work?

The mechanism of action or how antidepressants work isn't fully understood, but science went out on a limb to extensively research this class of medicine over the years and found that they work by increasing the presence of specific neurotransmitters (brain chemicals) such as serotonin, norepinephrine, dopamine and more in the body by stopping the reabsorption of them.

These chemicals affect things like moods, emotions, motivations, and more. By increasing the presence of these neurotransmitters, antidepressants stabilize and regulate inconsistencies that fuel depressive conditions. This mechanism of action slightly differs from one class of depressants to another, but the basis of affecting the presence of brain chemicals is the same.

So, it is somewhat clear how depressive states or feelings of anxiety are effectively sorted out using these treatments. This same influence on brain chemicals can result in other beneficial effects, such as pain relief and weight loss/gain. Although weight change is considered a side effect of antidepressant use, there is some theory behind why it happens.

Experts believe that the increase in serotonin might be the reason behind the weight loss. According to a ScienceDaily study, serotonin is a natural appetite suppressant. When serotonin levels peak, appetites decrease, food cravings are limited, and you feel fuller for longer. The stabilization and regulation of other brain chemicals can also favor weight loss. So, in essence, weight loss is definitely possible while taking antidepressants, however, there is no guarantee of it due to varying body compositions and medication types.

We've established a clear link between antidepressant use and mild but noticeable weight loss. After extensive research, we found 3 antidepressant medications connected to weight loss. Below we look at clinical evidence linked to each one of these treatments that supports the theory:

Wellbutrin is an atypical antidepressant that alters neurotransmitters norepinephrine and dopamine. It is actually one part of the popular weight loss drug naltrexone-bupropion, also known as Contrave. Contrave is FDA approved to treat those who are overweight or have obesity, which means bupropion's ability to induce weight loss is quite solid.

-In a meta-analysis containing 27 studies involving different antidepressant treatments, Wellbutrin was considered the only treatment that induced weight loss, while others caused weight gain. The treatment was also associated with fewer negative side effects.

-Another long-term study assessing the long-term weight loss effect of different antidepressants found Wellbutrin caused a 7.1 pound loss over two years while other antidepressants showed weight gain. The significant weight loss brought experts to the conclusion that bupropion may be considered a first-line drug for patients who are depressed and suffer from obesity or are severely overweight.

-In addition to weight loss, bupropion is also considered a weight maintenance aid in some sense. A study found that adults with obesity who took bupropion lost 7- 10% of their body weight over 24 weeks and maintained much of that weight loss at the 48-week mark.

Prozac belongs to the SSRI class of antidepressants. It works by increasing the availability of serotonin in the brain. By doing this, it controls and manages symptoms of anxiety disorders.

-Studies regarding weight loss and Prozac use vary as some experience weight loss when on treatment while others don't. The evidence shows that weight loss linked to Prozac use is fleeting at best, as the loss is followed by significant weight gain after 6 months+.

Cymbalta is an SNRI used to treat depression, anxiety, and nerve pain. It does this by restoring serotonin and norepinephrine levels in the brain. Research on the influence of duloxetine on weight loss is unclear. However, clinical findings showed that it decreases appetites, an effect that could help users lose weight. But there isn't a consistent connection between this effect and weight loss.

Why do Antidepressants Affect Weight?

The effect antidepressants have on weight is, at best, partially understood as there are so many factors to consider, especially from one class of antidepressant to another. In simple terms, antidepressants act on several neurotransmitters, chemicals, and receptors in the brain. They balance and improve their stance in the body and brain, which then affects weight.

Let's look at the common neurotransmitters affected by antidepressants and how that can cause weight changes:

Along with the effect on neurotransmitters, many physiological and psychological factors are at play regarding weight. For example, depression, anxiety, or other mental conditions can cause individuals to either increase or decrease consumption, leading to weight gain or weight loss.

If there are physiological markers that support bulimia or obesity, this could escalate the issue in two different ways. Considering the varying factors, it's safe to say that weight loss or gain is not guaranteed when taking antidepressants.

Have Antidepressants Ever Been Prescribed for Weight Loss?

Antidepressants are FDA approved to treat depressive disorders, and although off-label use is possible, it is not recommended or suggested. Antidepressant treatments are never prescribed for weight loss due to the risk of side effects and adverse outcomes they may cause. Although we've touched on some interesting evidence that it can support weight loss, the safety factor is concerning.

If these antidepressants are used independently for weight loss, they can induce various side effects. These side effects include:

These side effects can have a severe disposition and often last for an extended period of time. They do not disappear as use is continued, and the body does not become familiar with the treatment because its presence as a whole is not needed.

When it comes to antidepressants and weight loss, there is strong evidence that points to fat elimination, but the safety of using antidepressants without an underlying mental condition is not safe. Thus, these treatments never made it on first-line treatment lists for weight issues. However, they can safely facilitate weight loss in individuals with weight-related medical issues like obesity and mental health conditions. Under these circumstances, these treatments have proven to be very successful. The antidepressant treatment options that cause weight loss can also be chosen over other options if the circumstance is fitting and an indication for use is present.