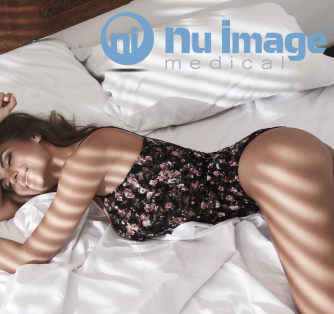 Friday night date night doesn’t have to be spent looking up convenient movie times and rushing through dinner in order to make it on time. Though snuggling in dimly-lit theatre with a box of popcorn perched between the two of you might be reminiscent of your early relationship days, an evening spent with dozens of others watching the latest release isn’t quite as romantic as it used to be. You can take the general idea of a romantic dinner and movie back to your living room, as there are dozens of classic and new release films that can set the mood for much more than a living room snuggle. In fact, prepping the night and focusing on stirring arousal benefits women's sexual health. So, you can use whatever excuse you need to justify some take-out and one of the following feature films. The end result of your well-planned date is sure to bring the entertainment back into the bedroom with you.

Although this technically falls under the category of psychological thriller, the sexual tension is glaringly obvious between a struggling American actress played by Scarlett Johansson and a tennis pro played by Jonathan Rhys Meyers. Wealth, sports, and a steamy affair are sure to keep the interest of each of you, though you may find the passionate sex scene in the wheat field may leave you both distracted and ready to move on to a more engaging pastime.

The onscreen chemistry between Olivier Martinez and Diane Lane and sweat-drenched sex scenes will leave you breathless and in hot desire. A tale of a failing marriage, an affair with a stranger, and more passion and conniving that you can stand in two hours will have you on the edge of your seat trying to wait for your own turn in bed. Since you aren’t at the theatre, you can put the movie on pause and take part in your own sexual pleasures. You and your partner can get hot and heavy on the couch or in the bedroom, so long as you release the sexual passion and tension that has been building throughout the evening.  Planning ahead and having a product like Scream Cream on hand can heighten your sensitivities and sensation, improving your orgasm experience.

You can’t deny that this film is still the hottest foreplay-flick since its release in 1987. Its immense popularity was evident from the start, becoming the first home video to sell more than one million copies. The seductive gyrating and grinding has a lot to do with setting the mood, but looking at Patrick Swayze without a shirt on is just as effective. You and your partner could try some dirty dancing on your own and see where the music takes you.

Since Patrick Swayze seems to be the man of the hour for your date night, you shouldn’t ignore the passion that comes across in “Ghost.” In this film, Swayze tries to find peace after his death, which was tied to a shady work deal with one of his closest friends. Having been stripped from the love of his life, he also looks for a way to communicate with his partner, who is played by Demi Moore. Though you won’t find full-blown nudity or wild, crazy sex, the deep passion and sensuality of the connection between the characters is sure to draw you closer to your partner so you'll long for your own night of magic.

With several of these films to choose from, the Fifty Shades phenomenon that swept men and women alike is sure to ignite a sense of yearning and desire that you’ve never felt before. Mixing in tantalizing sex with the misunderstood or hidden urges for BSDM, the on-screen chemistry between Jamie Dorian and Dakota Johnson will leave you ready to say yes to whatever sexual pleasure enters your mind. There is lots of room for sex education in this film, as many of those who watch it out of curiosity find themselves wanting more from their sex life.

With these movies downloaded and ready to go, you can throw out the status quo of Friday night date night. Add some spice back into your sex life with one of these tantalizing romantic films.