13 Things About Peptides You May Not Have Known 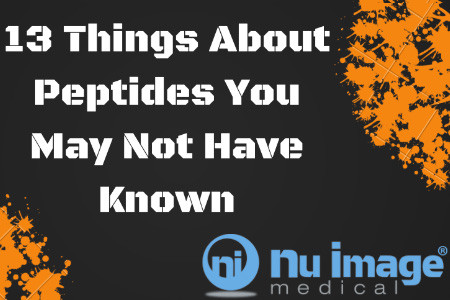 The aging process will feel differently for each individual, but feelings of anxiety, low energy, and a decrease in physical stamina are commonly felt among those who are heading on up in years. If you fit into this category, take heart and get excited. The Nu Image Medical team has an anti-aging program that will help you live your best life no matter what your age or physical condition. The individualized but innovative approach to wellness and optimum health places a focus on the human growth hormones and the roles of a peptide.  If you aren’t familiar with what a peptide or does, these facts will break it down for you.

A peptide is made up of two or more amino acids that are linked together by a chain. They instruct the cells of the body on how to function, and they dictate what hormones should be excreted. They act as messengers.

Peptides have been included in medication to reduce fatigue and improve sleep patterns. Some of these sleep-inducing peptides are found naturally in cow’s milk, which has a sedative-like effect on the brain and sustains deeper sleeping routines.

Peptides can be used for other areas of physical health and wellness. Antimicrobial peptides have been shown to fight fungal infections, viruses, parasites, and other foreign bacterial substances in the body.

Metabolic stress has been known to decrease with peptide supplements. Conversely, this improves the functionality of the thyroid, which helps maintain stability for many bodily functions, including weight loss.

Faster fat burning is achieved when peptides inhibit glucose burning activities within the body.  This can lead to increased exercise endurance.

Peptides are smaller versions of protein, literally being the final product protein digestion. Proteins are made of at least 50 or more amino acids, a vast different in the two string connection of a peptide.

Small protein-like molecules called neuropeptides are used for communication between neurons. These are signaling molecules that are designed to influence the activity of the body and the brain through very specific ways.  They are generally released along other molecules knows as neurotransmitters.

Tripeptides have taken a front row seat in the battle against aging. The tripeptide belongs to the family of amino acids, but is a new specialized molecule with a synthetic peptide containing three amino acid residues and help together using a peptide bond. When used in cosmetic products or anti-aging serums, it is said to improve the condition of the skin and gives it a smoother surface appearance. Wrinkle creams and other products have flooded the market in order to ease the consumer mind about the aging and empower them to address it.

A polypeptide is linear bond or chain of amino acids. These bonds are often the foundation blocks for protein, which helps control and even trigger many of the body’s functions. One of the uses for these peptides is to invade the skin layer and dictate cellular behaviors. Part of the function deals with the body’s collagen.

Opioid peptides, which are found in the adrenal and pituitary glands, receive a lot of attention due to their easily mimicked activities from opioid drugs. The purpose of these peptides in the brain are to regulate or control emotion, motivation, and attachment behaviors, but they can also influence the body response to pain and stress or food intake. The similarities between these natural functions and the synthetic opioids can been in the prescription use for pain-relieving purposes, yet the addictive nature and body dependence shows the dangers in prolonged use.

While it might seem that the former inclusion of opioid peptides scares away the potential benefits, research shows that peptides can improve sport performance. The collagen produced can restore muscle strength by replacing the protein and accelerating healing. It can prevent injury by strengthening the connective tissues in the body.

Some peptides can actually decrease depression. Hypocretin is a neurotransmitter peptide that has been shown to improve period of happiness when levels of the peptide were higher, and greater bouts of sadness and depression when levels were reduced. Additional studies with the hormone melanin also support the role of peptides in regard to addressing depression.