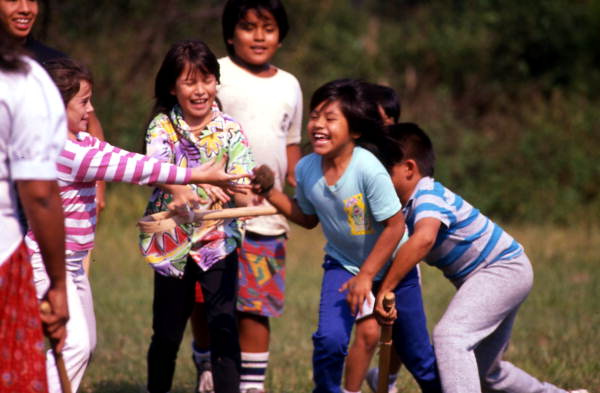 When you were young, around the ages of eight or nine, the prospect of school work, academic performance, or studying was likely the last thing on your mind as you either hopped through mud puddles, ran through a field, kicked a ball, grabbed a lizard or frog to show to your friends. Little did you know, these erratic activities actually could have substantially improved your ability to think, according to one of the most ambitious studies to ever be conducted about physical activity and cognitive performance in children. Once again, the results highlight the importance of physical activity for a developing child's brain health, especially in terms of the particular thinking skills that greatly affect academic performance.

The thought that children who are more active tend to think better isn't a new one. Recent studies have shown that children who walk before math and reading tests tend to have higher scores, even if the particular child is overweight or unfit. Still more studies have found a correlation between children's aerobic fitness and the structure of their brain, with areas of the brain devoted to learning and thinking being generally larger among young people who are more in shape.

The only flaw with these studies is that they were short term, or they could not tease out whether fitness had or had not actually changed the children's brains, or if the more well-developed brained children just liked exercise.

So far the new study, which was published in September in Pediatrics, researchers at the university of Illinois at Urbana-Champaign approached school administrators at public elementary school in the surrounding communities and asked if they could recruit the school's eight and nine year old students for an after school exercise program.

This particular group was of interest to the researches because previous studies had determined that at that age, children usually experience a boost in their brain's so-called executive functioning, which is the ability to impose order and organize your thinking. Executive functions help to control mental multitasking, maintain concentration, and inhibit inappropriate responses to mental stimuli.

Children whose executive are stunted tend to have academic problems in school, while more developed children who have better executive functions tend towards doing well.

The researchers pondered whether regular exercise could improve a child's executive-function skill, and provide a boost to their normal mental development. They received commitments from two hundred and twenty local young people and brought all of them to the university for a series of tests to measure their aerobic fitness and current level of executive functioning.

The group was then divided in half by the researchers, with one hundred and ten of the children joining a wait list for the after school program, which ensured they would continue with their normal behavior and function as a control group. The other half of the boys and girls began to be bused every afternoon to the university campus, where they participated in organized, structured bouts of what amounted to crazy, childish, chaotic playtime.

"We wanted them to play," said Charles Hillman, a professor of kinesiology and community health at the University of Illinois who led the study.

Wearing heart rate monitors and pedometers for monitoring purposes, the children were guided through exercise that doubled as romping. The activities, which changed frequently, consisted of games like tag, as well as instruction in technique skills, such as how to dribble a soccer ball. The exercise curriculum was designed to improve both aerobic endurance and basic motor skills, Dr. Hillman said.

The two hour sessions also would include downtime, because children naturally expend all of their energy in wild bursts and then fall flat, only to rise and repeat the process like so many automatons programmed to self recharge. In total, both the boys and the girls generally moved at moderate to vigorous intensity for about seventy minutes and covered more than two miles per sessions, according to their pedometers.  The program went on for an entire school year, with sessions available every day after school for nine months. Not ever child attended every session, naturally.

At the end of the program, both groups returned to the university to repeat the physical and cognitive tests. The results were as you would have expected, with the children in the exercise group being more physically fit than they had before, while the control group was not. The active children had also lost body fat, though body composition and weight were not focused on in this study.

What was more important to note, the children in the exercise group also showed a substantial improvement in their scores on all of the computer tests of executive function.  They were better at attention inhibition,which is the ability to block out irrelevant information and concentrate on the task at hand, than they had been at the start of the program, and had heightened abilities to toggle between cognitive tasks.

Lending more credence to the study, the children who had attended the most exercise sessions also showed the greatest improvement in their cognitive scores.

Meanwhile, the children in the control group also raised their test scores, but to a much smaller extent. In effect, both groups brains were developing, but the process was more rapid and expansive in the children who ran and played. The message is, get kids to be physically active for the sake of their brains, as well as their health, Dr. Hillman said. After-school programs like the one he and his colleagues developed require little additional equipment or expense for most schools, he said, although a qualified physical education instructor should be involved, he added.

Extended physical education classes during school time could also ensure children engage in sufficient physical activity for their brain health. But school districts nationwide are shortening or eliminating P.E. programs for budgetary and other reasons, a practice that is likely shortsighted, Dr. Hillman said. If you want young students to do well in reading and math, make sure that they also move.