How to Avoid Weight Gain this Holiday Season 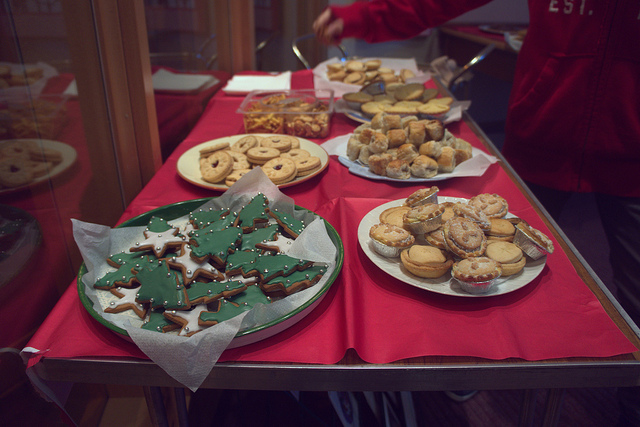 It's easier said than done, but it is definitely possible to avoid weight gain during the holidays by following just a few strategies. You can even get away with indulging in a few treats as long as you exercise restraint and control your portion sizes. Below are some tips to help you stay healthy throughout the holidays:

This may seem a bit obvious, but controlling portion sizes is one of the easiest ways to avoid weight gain. One of the biggest causes for weight gain isn't just the unhealthy food that people eat during the holidays, it's the fact that the portion sizes for entrees and dessert are often gigantic. A quick and easy way to control your portion sizes is to use smaller plates. Smaller plates are scientifically proven to encourage you to eat less because you are more likely to fill up a large plate even if the food is rich in calories.

It can be easy to forget to eat the smaller meals during the holiday season and then gorge on a large dinner, but eating large meals is one of the biggest contributors to weight gain. The excess calories that you don't burn after your meal are converted to fat, and when you arrive at a meal hungry you are much more likely to overeat. Try to space your meals out throughout the day as you might do with your regular eating schedule, and avoid eating huge meals later on in the day. Also, try to eat breakfast as much as possible during the holiday season as you are less likely to gorge during dinner, and eat multiple meals throughout the day but don't snack on junk either.

Tip #3 - Avoid drinking as much as possible

Alcohol ends up being a major source of calories during the holiday season, and the weight gain from alcohol can easily be ignored. Try to limit yourself to just a few drinks if you do. If you drink more, you are also more likely to overeat, so it isn't just the calories from the alcohol that can be detrimental. You might also try a lower calorie alcoholic drink, and some good alternatives to alcoholic drinks include carbonated fruit juice or soda water. It isn't going to kill you if you have a few drinks of eggnog, but most people don't limit themselves to just a few, so it's often a good idea to abstain from drinking altogether for at least most of the time.

Tip #4 - Be careful which desserts you pick

Your choice of desserts will end up being one of the biggest factors in how much weight you gain (if any) during the holidays. Desserts can end up being a huge source of calories, and all of them certainly are not equal. Look for lower calorie dessert options such as fruit tarts, small chocolates or dark chocolate, or small portions. If you know that dessert is one of your weaknesses, again it is best to avoid it altogether and replace it with something like fruit or smoothies. If you do want to indulge in dessert, remember to use small plates and limit your portion sizes to a single small serving rather than a heaping serving of pie or cake. Also, avoid piling on several smaller servings of desserts which is just as bad as eating a huge portion of cake, and be selective about it too. Don't just pick up anything that looks good, pick a dessert that you know will satisfy your sweet tooth with a small portion.

You don't have to weigh yourself every single day during the holidays, but if you weigh yourself at least twice per week you can catch any weight gain before it becomes a problem. You may not want to think about your weight until the holidays are over, but if you find that your weight is fluctuating during the season you might be able to catch a problem before it happens. If you notice that you are gaining weight you are also more likely to be careful about what you eat and selective with your food choices. If you do weigh yourself, be sure that you weigh yourself in the morning on an empty stomach, and don't be alarmed if you start gaining weight (some if it may be water weight), but instead just scale down on any unhealthy eating and limit your portions.

When you're traveling or taking time off of work for the holidays, the last thing on your mind might be exercise, but continuing your exercise routine is one sure way to keep the pounds off. You don't have to keep it at the same intensity as your normally do (if you don't want to), but working out at least 15 to 20 minutes every other day can help you burn the excess calories you are almost certainly guaranteed to consume. Working out a few times per week will also give you excess energy and avoid feeling lethargic during the holidays. You don't need to be at the gym either, you can stick to simple cardio exercises like jogging, hiking, swimming, biking or whatever else might be close to you and accessible.

Tip #7 - Bring you own food to the party

Don't rely on other people to support your healthy eating habits during the holidays; chances are most of the food options that you will have at a holiday party won't be healthy. If you bring you own food to holiday potlucks you will at least have one healthy option available. You might even encourage some of your friends to switch over to healthy eating. In general you should cook as much as you can during the holidays and avoid party unless you don't have much of an option, and there are plenty of healthy holiday recipes available. Also, don't try to sample everything you find at a party but stick to just a few options in normal sized portions, and if you know that you brought a healthier meal eat more of it and a smaller portion of the calorie rich options.

Staying hydrated during the holidays is particularly important because you are likely to add a lot more sodium into your diet, and the food can be heavier and more difficult to digest. Be sure that you drink plenty of water throughout the day and during dinner in particular, and always have water available at every meal. By staying hydrated you will be much less likely to overeat because drinking water is proven to help you eat less. In general you should substitute water for any drink with calories whenever you can, and if you are going to drink something with calories at least have water available with it. That way you won't rely on drinks with calories to stay hydrated, and you can expect that you will be tempted to drink more fluids because of the excess salt that is found in many holiday dishes.