How Chewing More Can Help You Lose Weight 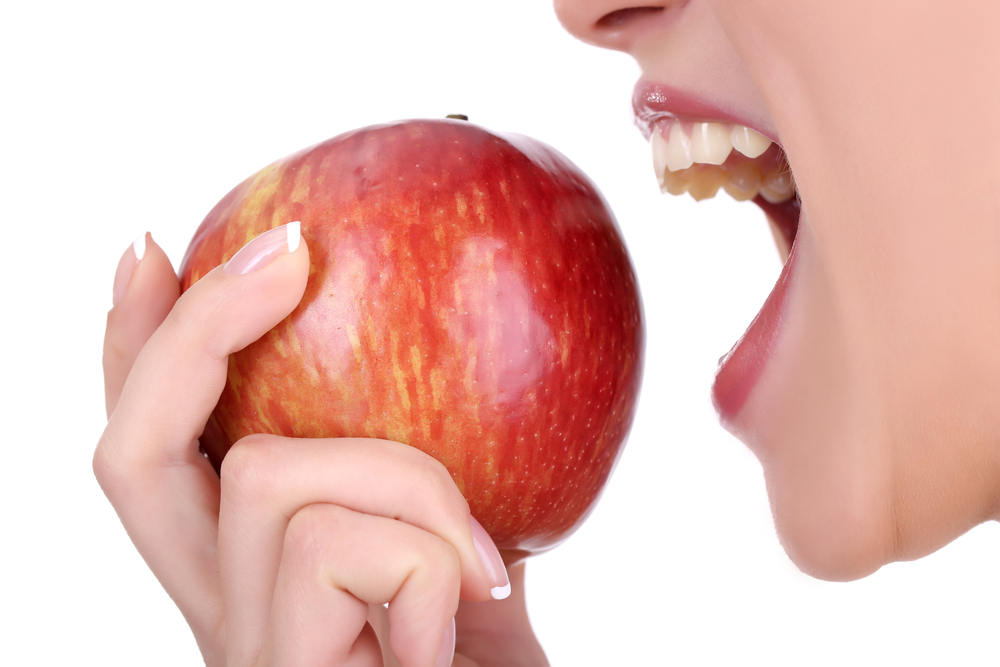 The simple act of chewing more can significantly help you lose weight by helping you regulate your appetite and giving your brain time to register the fact that you've started eating. It may not seem like it would make a difference, but the effect can be quite substantial, especially if you've been a fast eater in the past and if you've struggled with weight gain. Several studies have shown that slowing down the pace of your eating can make a significant difference in the total number of calories that you eat during each meal. Even if you save just a few hundred calories each week, it can quickly add up when you're trying to lose weight, but the chances are that you'll save even more calories than this.

The simple act of chewing your food more does quite a bit to benefit your health and can actually help you to lose weight. Chewing your food breaks down the large particles into smaller particles that are more easily digested by your body. This makes it easier for your body to absorb the nutrients in food, and also makes it less likely for the food particles to be broken down by harmful bacteria and fungi in the digestive tract. A study that was presented at the 2013 Institute of Food Technologists Annual Meeting in Chicago found that when participants chewed almonds for a longer period of time, the smaller particles were more quickly absorbed by the body [1].

The more that you chew the less food that you eat

The more that you chew your food, the less food that you will likely eat at any particular meal. Chinese researchers found that obese men are more likely to chew a lesser amount per bite compared to non-obese men. The study included 14 obese men and 16 lean men who ate a typically Chinese breakfast of pork pie with a video camera being used to monitor how long they were chewing. The study also found that while obese men had the same size bites as non-obese men, they were more likely to consume more calories because of the faster pace of eating.

When the men were asked to chew each bite 40 times at minimum, they consumed about 12 percent fewer calories, whether they were obese or not, compared to when both groups chewed each bite 15 times. When they chewed each bite 40 times they also had lower levels of a hunger hormone called ghrelin. The study concluded that "chewing less is a risk factor for obesity" and several other studies have also determined similar consequences when participants don't chew as much or when they speed up the rate of their food consumption. They also concluded that encouraging people to chew more could be a valuable tool for weight loss along with dieting and exercise of course [2].

One of the reasons why chewing more with each bite may help you lose weight is the fact that appetite and calorie intake is largely controlled by hormones. As previously mentioned, one of the main hunger hormones is ghrelin. After you eat something, your digestive system suppresses ghrelin production and releases anti-hunger hormones like glucagon-like peptide -1 (GLP-1), and cholecystokinin (CCK). These hormones tell the brain that you've recently eaten something and that it's time to switch into a metabolic mode, and the entire process takes about 20 minutes [3].

So if you scarf down a bunch of food before that 20-minute window, you aren't really giving your brain and body the time to register that you've eaten anything, and that's one of the main reasons why a lot of people gain weight. That may not seem like enough time to eat a lot of food but it actually is, especially if you're a fast eater, and a lot of people can down 500-1000 calories or more within that period of time even at a moderate pace. So just the act of slowing it down and chewing your food more can dramatically reduce your appetite because it allows your body the time it needs to process the fact that you've started eating. Studies have also shown that satiety hormones actually increase when you eat your meals more slowly, so the appetite suppressant hormone effect is stronger when you just slow down your eating pace [3].

Chewing more slowly can help you be more mindful with eating

Another bad habit that can easily lead to weight gain is mindless eating, or not focusing on your meal when you're eating. There are plenty of distractions that people tend to prefer enjoying when they are eating like watching a movie or television, playing a video game or browsing the internet, and those distractions can end up causing you to eat more calories than you normally would. The practice of "mindful eating" or simply paying attention to what you're eating can make a world of difference in the amount of calories that you eat in one particular sitting.

A report published in the American Journal of Clinical Nutrition by a team from the University of Birmingham in the United Kingdom found that being distracted made people eat a larger amount of food at each meal [4]. Harvard Health mentioned that the results of the study make perfect sense because "if you aren't mindful of what's going in your mouth, you don't process that information." You aren't likely to remember that you even ate anything, and without a memory of you eating, you're more likely to eat again at a later time. That's exactly what the study found: that you're more likely to eat more at one sitting when you aren't paying attention, and you're also more likely to eat more calories later on. So it definitely is worthwhile to pay attention to what you're eating and to slow it down and focus.

Chewing your food more is easier on your digestive system

Another good reason to chew your food more is the fact that it's easier on your digestive system. Saliva contains digestive enzymes, so the process of digestion starts as soon as you start chewing. For example, an enzyme called lingual lipase helps to break down the fats in your meal. The longer that you chew the more time that those enzymes have to break down the food. That alone helps the digestive process significantly and makes it much easier for your body to process your food. Chewing also breaks the food up into smaller pieces and predigests it so that it's easier for your large and small intestine to absorb it. Digestion overall is an energy intensive task, and you can reduce the energy requirements on your body just by chewing more with each bite.

When you slow your eating down you enjoy it more

The simple act of slowing your eating down can make your meals a lot more enjoyable and it gives you some time to relax. Try to take the time out of your schedule to relax for at least two of your meals during the day. Because of the weight loss benefits previously mentioned from chewing your food more and slowing down your pace of eating, it's worth it for that alone, but you'll also get to enjoy the flavor of your food. Try to really enjoy each bite and become more familiar with the taste and texture of food, and try to enjoy your meals with friends and family when possible rather than getting a quick bite of processed food or junk food just to keep going. There's no particular amount of chewing that is perfect, but experts say around 30 to 40 times per bite is pretty close to ideal for the weight loss and health benefits.