Can Watching TV Make You Fat? 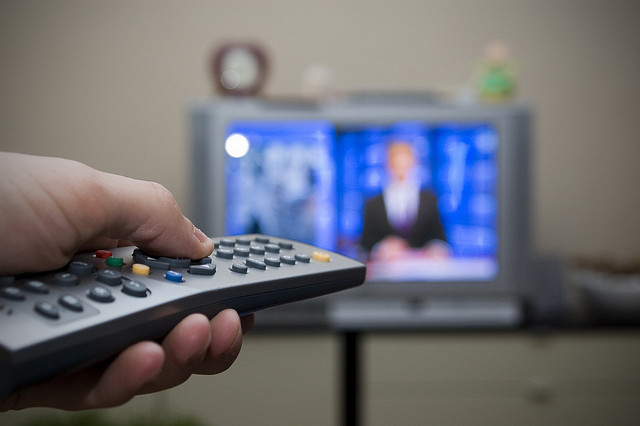 Can watching TV make you fat? Americans watch an average of 5 hours of television every day, and this devotion to TV watching has become a habit that has contributed to obesity on a large scale. A sedentary lifestyle is one of the major contributors to weight gain, and combined with an unhealthy diet it has been one of the major causes for the epidemic of obesity in the United States. Watching television itself doesn't directly cause weight gain of course, aside from possibly slowing down your metabolism due to the lack of exercise, but it's the habits that are associated with weight gain that can end up making you gain weight. All too often, television watching is associated with the bad habit of eating junk food, and there are even studies that prove Â that watching TV can make you fat, and the more that you watch it, the more likely that you are to gain weight.

TV watching is associated with many illnesses and obesity

Time and time again, studies have shown a correlation between a longer amount of time spent watching TV and obesity. One study by Johns Hopkins University found that children who watch television are more likely to develop obesity, and the same effect occurs for adults. Adults who watch more than 14 hours of television per week were more likely to develop insulin resistance, high cholesterol and obesity. Television watching is associated with a risk of developing dangerous metabolic syndrome, which is a syndrome that is characterized by hypertension, obesity, high insulin levels, and a risk of developing type 2 diabetes. Metabolic syndrome is thought to be a precursor to many different illnesses like heart disease and cancer. There are specific reasons as to why television watching is associated with obesity, such as the fact that you are more likely to overeat when your attention is diverted, and the fact that many people eat junk food when watching TV, but the correlation between TV watching and obesity is well proven.

A sedentary lifestyle is highly dangerous to your health

One of the biggest factors that can lead to long term illnesses such as diabetes and heart disease is a sedentary lifestyle, and although there is well established evidence that exercise and a healthy diet are important for preventing obesity and illness, many Americans are still not active enough. Those who are physically inactive not only have a greater chance of weight gain, but they have a greater risk of cancers like colon or breast cancer. Physical inactivity can lead to insulin resistance which in turn leads to type 2 diabetes, and it can also cause the loss of lean muscle tissue. Sitting and watching television for several hours at a time can certainly lead to a sedentary lifestyle, and several studies have correlated television watching with weight gain. Interestingly, studies have also found a connection between the material that you watch on television and the type of food you are likely to eat.

Food related television shows such as cooking shows and competitions are likely to increase your appetite, based on studies published in the academic journal Appetite. The studies found that people who watched cooking shows and were presented with 800 calories of food which consisted of cheese curls, chocolate candies and carrots were significantly more likely to eat the chocolate candies than participants who watched a nature show. The act of watching food on television can stimulate your appetite, as much of appetite is psychological, so it can make it even worse for people who are trying to lose weight to watch cooking related shows. So, although the type of programing that you watch can increase your appetite, it is also the length of time that you watch and your eating habits.

Your tastes can change when your attention is diverted

Studies have found that you are more likely to eat salty, sweet and fatty foods when watching television or being distracted. Watching television can make it even worse to eat these foods because your attention is diverted and it can be easier to eat larger quantities of food. A study that was published in Psychological Science found that people who are distracted require a greater amount of saltiness, sweetness or sourness in their food to be satisfied. Sweet or partially sweet foods require a smaller quantity in order to feel satisfied when your attention is focused on eating, so watching TV can actually make you crave greater quantities of junk foods. The best thing to do when eating is to turn off the TV and enjoy your meal before turning it back on, especially if you have struggled with overeating when watching it.

If you struggle with TV watching, try limiting your time

The best thing to do is to limit your time when watching TV to just an hour or so per day if that, if you happen to struggle with weight gain. By limiting the time you spend on the TV, you will be less likely to eat and you won't be sedentary for a long period of the day. Try to space out your TV watching and if you have the opportunity to watch your favorite shows on a tablet while traveling, try to do that as well. Try to also spend as much of your day as possible doing activities that require standing. Instead of watching all of your favorite programs at once, space them out over multiple days so that you only spend an hour or two watching TV per day.

Another idea is to exercise while watching TV, such as on the treadmill or exercise bike. If you exercise for an hour you can burn up to 400 calories or more watching TV, and you can use the attention diversion to your favor because it can be easier to exercise when you attention is focused on something else. You may even get better results out of your workouts if you try this, as some people perform better when they watch TV or listen to music while working out. This way you will associate watching TV with something good for your health rather than eating, and you will be staying active and avoid the health impact of being sedentary. This way you also won't have to give it up.

If you have to eat when watching the television, the best thing to do is to eat healthy foods and avoid eating junk foods. A good way to do this is to have only healthy foods in your home so that you won't grab a junk food snack without thinking. If you eat something healthy it is much better than snacking on junk food, but you should be careful to limit your portions. Also drink plenty of water with your snack and be sure that you aren't doing it too often. No matter what, you need to limit the amount of time you spend being sedentary, so you should definitely try to avoid spending more than a few hours per day being sedentary outside of your work. By staying active for most of the day it will help you with your weight loss efforts and make it much easier for you to maintain a healthy weight and for your dieting to be effective.