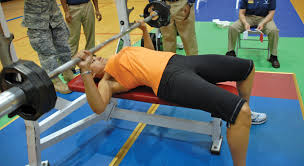 Many different methods of activating your muscles from certain angles proliferate gyms, health clubs, and fitness groups. For example, bodybuilders who target the inside of their quads using a wide stance with their toes pointed outwards, or targeting the peak of their biceps by only curling dumbbells halfway up before slowly lowering them back down. It's pretty common knowledge that changing your body position can change what part of the muscle you work.

The only way to really know which muscles are used is to measure their electrical activity with an electromyogram, or an EMG, which is the skeletal muscle equivalent of an electrocardiogram for your heart, otherwise you're just going on hearsay and anecdotal evidence. Thankfully, scientists have already done just that, and we can take a look at how different body positions affect muscle activity during weight training exercises.

To begin with, leg extensions and squats are a common workout. Comparing three leg positions, medially rotated, laterally rotated, and neutral, during a set of eight repetitions of leg extensions on a leg extension machine, Stoutenberg et al. (2005) found that medially rotating the legs by pointing the toes inward targeted the vastus lateralis and vastus medialus muscles, which are the two outer parts of the quads. Likewise, laterally rotating the legs by pointing the toes outward increased rectus femoris activity, which is the inner quad.

Using isometric contractions on an isokinetic leg extension machine, a machine on which you can do isometric contracts against a non moving leg pad, at three joint angles found that when the legs were held almost straight, a position often used to stabilize the knee joint during the early stages of rehabilitation after injury, medially rotating the legs produced greater quadriceps activity. However, Signorile et al, the authors of this particular study, suggested that in the later stages of rehab, a neutral foot position at a ninety degree angle may provide the most effective condition for rehabilitation following a knee injury, since this angle and foot position caused the greatest amount of quadriceps muscle activation.

When it comes to squats, Boyden, Kingman, and Dyson (2000) found that changing the leg position by pointing the toes in, out, or straight had no effect on quadriceps activity. McCaw and Melrose (1999) found that stance with did not affect quadriceps activity either, but did influence adductor longus and gluteus maximus activity, with a wide stance of about 140% of your shoulder width eliciting greater activity in these two muscles than a shoulder width or narrow, narrow being 75% of shoulder width, stance. Comparing partial, parallel and full squat depths, Caterisano et al. (2002) found that the gluteus maximus, but not the vastus lateralis, vastus medialis or biceps femoris, became more active as squat depth increased.

Another common set of workouts to undergo a similar study were lat pull-downs and seated rows. Signorile, Zink, and Szwed (2002) found that a wide grip during frontal lat pull downs using a cable lat pull down machine while seated increased the latissimus dorsi and triceps activity, whereas a close grip increased pectoralis major and posterior deltoid activity. In contrast, Lehman et al. (2004) found that wide grip did not increase latissimus dorsi activity, nor did a close grip with the palms facing in preferentially activate the biceps, as is commonly believed. To target the upper back muscles, seated rows seemed to have more activation than lat pull-downs. Lehman et al. (2004) also found that the trapezius, rhomboids, and latissimus dorsi were all more active during seated rows than they were during lat pull-downs. These researchers also found that the common recommendation of retracting the scapulae by squeezing the shoulders together had no effect on muscle activity.

One of the more interesting studies was the article "Influence of bench angle on upper extremity muscular activation during bench press exercise" published in the European Journal of Sport Science. The authors set out to see the effects on muscle activation during free weight barbell bench press at zero degrees, thirty degrees, forty five degrees, and negative fifteen degrees bench angles. If greater or lesser angles enhanced this, the results would certainly be useful to most as a large chest is so actively sought out by most people who train.

The study's outcome supported the use of a horizontal bench press to attain activation of the upper and lower pectoralis major during the lift. It should be noted, though, that it was found a bench incline of thirty or forty five degrees resulted in increased muscle activation, providing a useful insight into the effective adaptations of bench press exercise for the best strength and size. It was concluded that, "the present investigation demonstrate(s) the importance of considering the effects of muscle activation throughout different points of the contraction/lift variations may be evident...in an effort to optimize a resistance-training program with the goal of improving muscle strength and development of the pectoralis major, it would be beneficial to include horizontal bench press and an incline bench of 30 degrees.

For the study, fourteen trained participants who were all described as frequent weight lifters all around the age of twenty one years old participated in two training sessions. In the first session, participants were asked to complete their one rep max on a horizontal barbell bench press with the greatest amount of weight they could lift. On the second session, they were fitted with electrodes to assess muscular activation, and were made to complete six repetitions for each of the four barbell press angles at about sixty five percent of their one rep max. Effects of bench condition were observed on the duration of muscle contraction and the contraction phase of the upper and lower pectoralis major, anterior deltoid and lateral triceps brachii.

And while push ups may seem a bit similar to bench pressing in the horizontal position, there appear to be differences when isolating specific muscles. Researchers found that for both exercises, the triceps were more active in a narrow hand position, and the pectoralis major was more active with a wider hand position for push-ups, and more active with a wide grip on the bench press. Moving from a wide to narrow grip for the bench press shifted the emphasis form the pectoralis major to the triceps. Lehman et al. also found that the rectus abdominis, but not the obliques, activity was greater when doing with pushups with hands on a stability ball as opposed to on a flat surface.

And perhaps even more sought after than a strong chest, similar studies were done on the abdominal muscles. And with all of the ab training devices on the market, how can you know which one is the best for you? Well, the simple answer is that you are best served on the floor or on a mat. Plenty of research has been done comparing commercial abdominal devices with traditional mat or floor crunches or sit ups to determine that traditional crunches are just as, if not more effective, for eliciting abdominal muscle activity. For example, when Sternlich et al. compared the effectiveness of commercial abdominal devices with traditional crunches consisting of lifting the shoulders and torso a few inches off of the ground, sternlicht et al. found that only one commercial device achieved a higher rectus abdominis activity than a normal crunch. In all other cases tradition crunches were better or similar to commercial devices.

When you do crunches, it may also be benefictial to lie on an unstabled surface. Vera-Garcia, Grenier & McGill (2000) using 6-second isometric contractionsand Clark, Holt & Sinyard (2003) using 2-second dynamic contractions found that the rectus abdominis and external obliques were more active during crunches performed on a stability ball with feet on the floor and back on the ball than they were during crunches done while lying on a stable surface. Sternlich et. al (2007) also found that abdominal muscle activity was significantly greater during stability ball crunches than during floor crunches only when the ball was placed under the lower back, while placing it between your shoulder blades on the upper back actually resulted in less abdominal activity than doing crunches on the floor.

While crunches on stable surfaces may be better for your abs, other abdominal workouts prove to be less so. Lehman et al. (2005) found no difference in rectus abdominis, external/interal obliques and erector spinae activity between upper-body exercises, like bench press, biceps curls, lateral raises, shoulder press, and tricep extensions performed while sitting on a bench versus a stability ball.  Beh et al. (2005) found that while the rectus abdominis and erector spinae was greater when a chest press was performed on a stability ball rather than a bench, there was no difference in muscle activity between stable and unstable conditions with a shoulder press.

Even the popular belief that certain exercises can target upper and lower portions of the rectus abdominis is also not supported by research. That is because muscles cannot contract with only part of their length. The six-pack look your clients dream of is not six separate muscles or three pairs of muscles. It's all one muscle, with tendon inscriptions separating each section.

While a couple of other studies have also shown differences in activation between upper and lower portions of the rectus abdominis, they did not express the EMG signal as a percentage of the muscle's maximum activity, precluding valid comparisons between the two portions of the muscle.

Now, I know that a lot of this stuff is very much in the language of people who are "in the know" or something along those lines, so here's the real long and short of it below.

To maximize how much your muscles are working when lifting weights, just follow these guidelines. For your quadriceps, squats are the way to go. Given the multijoint movement of the muscles, squats are the way to go. Whatever leg position you want when it comes to where your feet point, but a wide stance and low squat are the best way to activate your glutes. For your quadriceps themselves, whatever leg position, stance width, and squat depth you want will all get around the same effects. Be certain to hit depth every time, though, and make sure your legs are past parallel to the floor. This is, of course, barring any existing knee problems.

For your chest, make sure to use a grip nearly double your width when it comes to bench pressing. And in push up positions, a narrow hand position with hands together under the center of the sternum forming a diamond shape will really hit your chest and triceps. As for your upper back, the seated row machine is the way to go for isolation, as all the major muscles of the upper back, the trapuezius, rhomboids, and latissimus dorsi are more active during seated rows.

And finally, for the abs, do your crunches on a stability ball with your lower back on the ball, and the upper body lifted off for the best results on the old washboard.