Are Standing Desks Really Better For Your Health and Waistline? 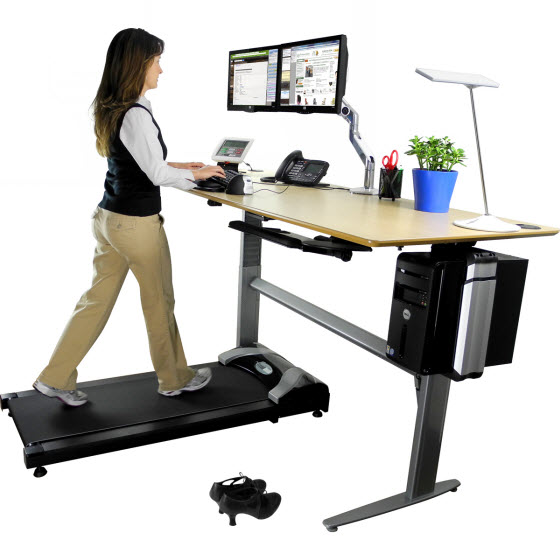 It turns out that investing in a standing desk might not be the best idea, considering the fact that they are not as proven to result in weight loss as previously thought. Standing desks are thought to be more beneficial than sitting desks, but the benefit is not thought to be substantial. In general, whether you are sitting or standing, if you are mostly inactive then there can be health consequences. The important thing to do is to get exercise on a regular basis if you have a job where you are mostly inactive during the day, as exercise can reduce the harmful health effects of inactivity, as well as following a proper diet.

Standing all day isn't much better than sitting, if at all. If all you are doing is replacing sitting with standing you can run into a range of other health problems that you wouldn't face if sitting. For example, standing too much can compress the lower spine and cause lower back problems. It can also increase the risk of varicose veins, deep vein thrombosis and other cardiovascular problems because of the fact that your heart has to work harder against gravity to circulate blood when you are standing. However, there may be some benefits to alternating between standing and sitting, and it may eliminate some of the health risks of doing either of them too long.

It's a mistake to not move when you're standing or sitting

The body was not designed to sit or stand still for too long of a period of time, and sitting still is a lot worse than sitting and moving around. Being fidgety is a good thing when you are at work, as it can improve circulation, keep your muscles working a little bit, and burn a few extra calories. It may not seem like much but it makes a major difference, especially when you're sitting for 5-6 or more hours each day. Be sure to stretch, recline, move your legs, and any other kind of small movements that you can make to try to get a bit more physical activity in when you are at work.

You don't necessarily need to purchase an actual standing desk

Standing desks can cost upwards of $2000 and they may not even be necessary for a lot of people. Most physical therapists and doctors recommend that you take a 3-5 minute break about every hour to stand up, and it doesn't cost you anything to do that. Getting up to use the restroom can count for your break, or getting up to grab a cup of coffee. Make any excuse that you can to get up and move around at least once an hour, but you don't need to spend $2000 on a desk to do that. Setting a timer can help you with this as well.

Some people don't work as well with standing desks

There are some tasks that just weren't meant to be done standing; for example there are some types of surgery where the doctor actually sits down to improve their stability or out of preference. Some writers prefer sitting and writing rather than standing, and the same goes for programmers and developers. It all depends on the person, and if you find that you are much more efficient when you are sitting, you don't need to sacrifice your work efficiency just because you're concerned about your health. Again, taking a break every hour or so is essential as well as any extra exercise that you can get, but you really don't need to purchase a standing desk if you don't want to.

Treadmill desks are better than standing desks but affect productivity

Yes, it's true, there really are treadmill desks which take standing desks a step further and actually allow you to walk or jog while working. These desks are more expensive than the traditional standing desk of course, and although they are a better option than standing desks in terms of their health benefits and ability to exercise while working, a study found that they can significantly interfere with productivity. Of course that's not hard to imagine, when the simple act of standing can affect productivity for some people, having to walk or jog could certainly significantly affect it as well. In that case, treadmill desks are probably not a good idea for most people unless you really can focus on your work while taking a stroll.

There is a significant amount of research being devoted to finding out whether or not active desks or treadmill desks are a better option than standing desks. There do seem to be health benefits and in particular it may provide a mood boost to help control work related stress. A study found that participants reported lower fatigue, depression and confusion when using active desks and were more focused, energetic and happy. When they returned to their normal desks their mood dropped back down to its normal level, and participants also showed that they had lower stress levels as a result of using their desks. So, it may be worth a shot to try an active desk for the mood boost alone.

In general, you don't need to purchase a standing desk or spend thousands on an active desk, even if you have a job that requires you to sit a large part of the day. Make it a habit to get regular exercise as much as you can, it's important for everyone but much more important for people who aren't moving much during the day. Try to stretch and take 3-5 minute breaks every hour, and don't be completely sedentary when you are sitting. On top of all of that you need to be cautious with your diet as well, as a sedentary lifestyle can make a poor diet even worse. But it can be managed and you can be very healthy just by making a few habit changes and taking short breaks to be active during the day.