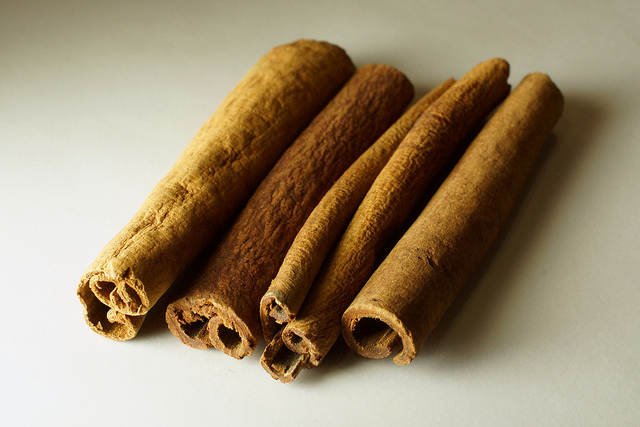 Your blood sugar levels and their fluctuations are intrinsically tied to your health. With recent research, it is becoming more evident than ever that foods that stabilize your blood sugar are important to eat on a regular basis, while foods that cause blood sugar spikes or fluctuations should be avoided. Your blood sugar levels are tied to a wide range of hormonal responses that can contribute to your body's metabolism, your mood, energy levels, fat storage and more. Your body has a very different response when you eat a bagel compared to eating piece of broccoli, and this response is what you need to be concerned about. In general, when you eat foods that break down quickly and cause a spike in your blood sugar, like a bagel, you can become insulin resistant and gain weight more easily. Even worse, you can develop pre-diabetes or diabetes, so be sure to include these seven and other foods that stabilize blood sugar in your diet more frequently.

Almonds are one of the best blood sugar stabilizing foods

Almonds are high in monounsaturated fats which are associated with stable blood sugar levels. They are also a good source of several vitamins and minerals that can have a wide range of beneficial effects on the body. Magnesium is one mineral in particular that can lower your blood sugar. The fats in almonds are metabolized slowly by your body, as well as the protein and carbs. One cup of almonds has 45 grams of fat, 28 grams of which are healthy monounsaturated fat, 20 grams of protein, and 20 grams of carbohydrates. This is an excellent balance of carbohydrates, protein and fat which makes almonds almost like a small complete healthy meal. A perfect snack to keep your blood sugar stable throughout the day and keep you energized between meals without putting on weight.

Blueberries are one of the best blood sugar lowering fruits

Blueberries are widely known to be a "superfood" for their dozens of health benefits. One of the top benefits of eating blueberries is the fact that they can help you normalize your blood sugar. Blueberries are an excellent source of soluble fiber and anthocyanins, which are pigments found in colorful fruits and vegetables. These pigments have many positive effects on the body. They inhibit certain digestive enzymes, which slows down digestion even after you've eaten a meal full of simple carbohydrates. In turn the spike in blood glucose that often occurs following a carbohydrate rich meal is minimized when you eat blueberries. A study also found that adding blueberries to the diet of obese people who were pre-diabetic resulted in improved insulin sensitivity after six weeks. The participants consumed two blueberry smoothies per day.

Similar to almonds, avocados are rich in blood sugar stabilizing monounsaturated fatty acids. One cup of avocado has 21 grams of fat, 14 of which are healthy monounsaturated fat, 12 grams of carbohydrates, and a small amount of protein (2.9). The fat in avocados is digested gradually and does not cause a rapid rise in blood sugar. You can eat a large serving of avocados and you won't have to worry about it spiking your blood sugar. Also a compound called beta-sitosterol in avocados is effective at reducing inflammation after working out, and lower inflammation levels are associated with lower insulin resistance. Avocado oil is also a great alternative to processed salad dressings for people who are concerned about their blood sugar levels, and you can come up with your own healthy salad dressings by adding natural herbs and spices to the oil.

Dark leafy green vegetables like spinach, kale, collard greens and others are excellent for blood sugar control. These foods are a rich source of magnesium, one of the most important minerals for blood sugar stabilization. Magnesium also acts as a sort of super nutrient in the body and has a wide range of other positive effects. The fiber in leafy greens helps them break down more slowly in the digestive tract and slows down the absorption of carbohydrates in your meals. Studies from six different studies have confirmed that leafy green vegetables when cooked or raw have one of the most potent effects on lowering blood sugar levels compared to many other vegetables and fruits. Without a doubt if you are concerned about your blood sugar you will want to include more dark leafy greens into your diet.

Not only is grapefruit proven to be effective as a weight loss aid, it is also excellent at preventing insulin resistance. Grapefruit have an antioxidant called narigenin which is effective at preventing insulin resistance. Studies found that mice who were given narigenin were able to control their blood sugar levels in spite of the amount of glucose that they ate. It turns out that this antioxidant may be one of the most potent compounds that can prevent insulin resistance as more research on grapefruit is performed. Grapefruit can interfere with the absorption of a wide range of different medications so if you are on any medications it is important to discuss eating grapefruit with your medical provider before you start adding it into your diet. If you are not on medications you don't have to worry as it is a natural fruit that doesn't have any harmful interactions by itself.

Chia seeds are an ancient food that happen to be one of the healthiest on the planet, and adding them into your smoothies or other recipes is a great way to control your blood sugar. Chia seeds are packed with vitamins, minerals, healthy fat and protein. They help to manage the negative effects of diabetes for people who have already been diagnosed and they can help to correct metabolic syndrome, a dangerous health condition that can lead to diabetes. They can stabilize blood sugar levels after a meal and they can lower cholesterol levels and help to reduce metabolic syndrome when eaten regularly. Studies in animals have found that the seeds can lower inflammation levels, improve good HDL cholesterol levels, lower LDL cholesterol levels, and reduce abdominal fat. In general they are an excellent food option for people who are pre-diabetic or anyone for that matter, as they can help maintain a healthy metabolism and protect against the development of metabolic syndrome.

Add cinnamon to your meals to control blood sugar

Cinnamon may be one of the best if not the best spice that can help you control your blood sugar levels. Cinnamon has been studied for its ability to lower blood sugar, and several studies have confirmed that it can protect against insulin resistance and it may even reverse insulin resistance. Studies have found that cinnamon by itself can lower fasting blood glucose levels, and the effect is about 3 to 5 percent, similar to the older generation of diabetes drugs. Cinnamon can also lower triglyceride levels and LDL cholesterol levels. Although cinnamon is not intended as an alternative to diabetes medications, it is helpful for those with diabetes to stabilize their blood sugar, and for those who haven't developed it yet it is a great preventative food. Ceylon cinnamon is the better alternative compared to cassia cinnamon which can have high levels of a compound that can cause liver toxicity.