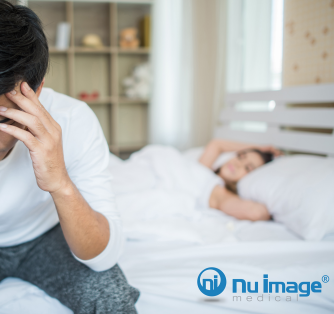 The month of June celebrates Men’s Health, putting a spotlight on the need for men to be more proactive in keeping healthy bodies and minds. According to statistics, men have higher death rates in nine of the ten causes of death categories, averaging a lifespan that is five years shorter than women. Poor health impacts a man’s ability to be a good father, husband, community member, employee, and supportive friend. In addition to the physical health needs that men tend to experience, there are also serious concerns with mental health. Though females report more suicidal thinking, males are more likely to take their own life prematurely and die by suicide. Men’s Health Month brings attention to these concerns and encourages everyone to be more supportive of male health.

There are certain physical conditions that are more prevalent in men, partially due to their genetic makeup and partially due to a lack of access to healthcare. Men's sexual health issues, like ED, plague men as they start to age, but so often this condition goes untreated. This isn’t for a lack of medication or resources since products like Mt. Everest can help men overcome weak erections. The condition isn’t addressed because men are more likely to avoid going to a physician to receive preventative or needed medical care for their symptoms or illnesses. The reasons for the lack of access to medical care are more closely tied to a lack of initiative rather than a lack of opportunity. Men feel they don’t have the time, the money, or the courage to face whatever might be going on inside. For these reasons, many men won’t have yearly screenings done for various conditions, leaving them until the situation has become more serious. Men’s Health Month tries to emphasize the need for preventative care measures and establish a new culture in American households that places significant importance on the health of men and boys.

Almost 50,000 people a year in the United States die by suicide. It is the tenth leading cause of death across the nation, but it is the seventh leading cause of death in American men. The suicide rate for men is three and a half times higher than it is for women, with middle-aged white men accounting for roughly 70% of all suicides. Men who are older than the age of 65 are in the greatest risk category for suicide, and though women attempt suicide more often, men choose more lethal means of death. There are multiple factors that increase the risk for an individual, and these risk factors apply to both men and women.

While these risk factors can be experienced by both men and women, men are still at a greater risk of suicide. There are several theories about why this may be true. Some of the struggles lie with the expectation that males refrain from displaying or expressing emotions. Men feel that they are supposed to be tough and independent, even in areas of emotions and mental clarity. This macho persona may make it difficult for men to reach and ask for support or talk about things that are bothering them. Since men tend to harbor their feelings inside, a diagnosis of depression is often missed. They may talk about issues that are stressful, but don’t mention specific words like sadness or feeling hopeless. Depression that is left untreated by a doctor may lead to self-treatment through alcohol or another substance. There is also an increased likelihood that men have the mental and physical strength to follow through with their desire to end their life, resulting in more lethal suicide attempts than what occurs in females.

Reducing the Risk of Male Suicide

It takes everyone in the family, workplace, and community to help reduce the number of male deaths by suicide. Even though someone you know may not be reaching out for help, there are signs that you can spot to clue you in to something being wrong. In men, symptoms of depression could include anxiety, loss of interest in sex or pleasurable activities, physical aches and pains, social withdrawal, missing work, or substance abuse. A man may not want to talk about what is bothering him, but just letting him know that you are available to listen and help as needed can be an open door to reach out.

During the month of June, take the time to focus on your health and that of the men around you. Don’t forget to pay attention to signs of mental wellness, in addition to physical needs.