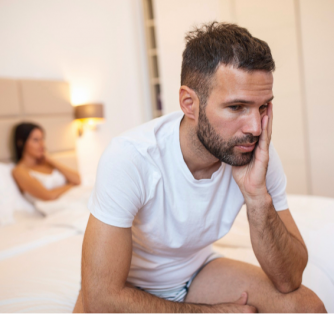 Sexual disorders are divided into several categories, each with its own defining characteristics. These categories are quite vast. However, male sexual disorders are often assumed to start and end with erectile dysfunction (ED) or premature ejaculation (PE). While these conditions affect a large part of the male population, it's not the only sexual dysfunctions men can suffer from. Males can experience Anorgasmia, a condition that inhibits orgasmic function. Research shows that the condition is becoming more extensively discussed as many men report symptoms.

Below we expand more on what Anorgasmia is, its symptoms, causes, and treatment:

What is Male Anorgasmia?

Anorgasmia in men is categorized into different groups. Let's look at them below:

Primary Anorgasmia is present for the entire duration of a man's sexual life, which means it may be difficult or impossible for men to reach an orgasm present from the first sexual encounter.

No matter which type of Anorgasmia is present, the condition has a domino effect on sexual health, as symptoms lead to significant sexual dissatisfaction and performance anxiety. This may cause the development of other sexual-related conditions such as erectile dysfunction (ED) and low libidos.

The Male Orgasm vs. Anorgasmia

The male orgasm is an underappreciated component of sex that most take for granted. The processes behind the orgasm are never described as overly complex and are always seen as lightyears apart from the female orgasm. But in actuality, the complexity of the male orgasm is equal to that of the female.

Motivation refers to the desire to engage in sex. It can come from any one of the senses (sight, hearing, smell, taste, touch, movement, or body position).

-Mental-Feelings and thoughts which facilitate excitement and arousal

-Physical-The promotion of blood flow which causes swelling and lubrication

The orgasm, the shortest phase of the sexual response cycle, is known as the peak of excitement that causes a sudden release of sexual tension. The orgasm is fueled by a combination of sexual activity and arousal. The process involves several nerve pathways, hormones, and organs.

One hormone that plays an integral role in the male orgasm is testosterone. This hormone is produced in the testicles and triggers the body to move through the sexual response cycle to reach orgasm.

The male orgasm also involves the contraction of the muscles of the penis, anus, and perineum (the space between the anus and scrotum). These contractions push semen out from the body through the penis. During an orgasm, the reward center of the brain floods with neurochemicals responsible for intense emotional responses.

This phase is referred to as the after-effects of an orgasm. It involves satisfaction and muscular relaxation—the penis goes from erect to flaccid.

Men who suffer from Anorgasmia experience a disruption in the processes that support an orgasm. These disruptions mean the body does not properly go through the phases of the sexual response cycle resulting in the inability to achieve complete satisfaction or an orgasm even if adequate sexual stimulation is available.

Symptoms and Causes of Anorgasmia

Let's look at these causes in more detail.

In some situations, the condition may have multiple causes that fall under the physical and psychological categories. A classic example is the consumption of certain medications like an SSRI and the presence of depression or anxiety. While these cases are sensitive and a bit more complicated to handle, they are not impossible, and the Anorgasmia remains treatable.

Sexual dysfunction, like any other medical condition, requires medical diagnosis to adequately treat the intensity and frequency of symptoms. Diagnosis is especially important when dealing with Male Anorgasmia because the condition does not have a one size fits all remedy, and treatment plans vary from person to person depending on various factors.

Depending on the possible cause of the Anorgasmia, healthcare providers may recommend the following tests:

Since these hormones affect sexual performance in some way, checking their levels or functionality can map out possible treatment options for Anorgasmia. Hormone tests are done via a blood test, and results are typically ready in a few days.

Once these tests are done, diagnosis and treatment typically follow. However, there are some cases where diagnosis doesn't lead to the treatment phase. Standard Anorgasmia treatment may not be possible if you:

Treatment Options for Men with Anorgasmia

Unlike other male sexual dysfunctions like ED or PE, which have an extensive list of treatment options available for use, Anorgasmia doesn't have a specific list of pharmaceutical aids that is dedicated to curing the condition. However, there are other approaches that can work to manage the condition and restore orgasmic function.

Below we list some of the common treatment options:

If the condition is caused by psychological or mental issues such as anxiety, depression, mood disorders, and trauma, men might benefit from psychotherapy. A PubMed study presents psychotherapy as an effective treatment option against Anorgasmia, especially when combined with physical intervention.

In some cases, certain medications, such as antidepressants, might cause delayed orgasms, so switching medications or doses can help stop the symptoms of Anorgasmia.

Reduced level of penile sensitivity can cause Anorgasmia. In these cases, vibratory stimulation, which involves vibrating the frenulum (elastic area of tissue close to the tip of the penis), can help induce an orgasm. A study shows that this process is indeed effective in treating Anorgasmia

Anorgasmia caused by low testosterone can be treated with supplementary testosterone like Tlando (testosterone undecanoate) or a dopamine-promoting drug like Dostinex (cabergoline). These treatment options can restore a man's ability to orgasm by correcting and promoting testosterone levels.

Although Anorgasmia is complex in some sense and doesn't have a direct line of treatment available to alleviate its symptoms, the condition can be successfully managed if the right steps are taken. Treatment of the condition revolves largely around identifying and addressing potential causative factors. These factors can be picked up through the diagnosing process, so seeking the help of medical professionals is necessary. By following the recommended course of action, men can be certain they have the condition and effectively eliminate causes to reinstate orgasmic function and achieve satisfactory orgasms.