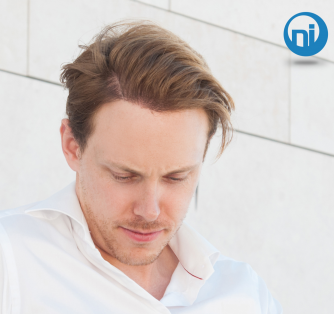 Baldness and problems with thinning hair can affect both men and women, although it seems that men have a more noticeable struggle when it comes to losing hair. Male pattern baldness is said to plague about 50% of U.S. men over the age of 50. Though many factors affect the rate and severity of loss, there is strong support for the effect that DHT has on male baldness. In addition to wreaking havoc on hair, DHT has been linked to the condition of enlarged prostate and prostate cancer, as well as benign prostatic hyperplasia.

As a sex steroid, DHT is produced in the gonads, but it is also an androgen hormone. The androgens are what give masculine characteristics to males, such as large muscle mass, deep voices, and thicker body hair. The hormone also helps with fetal development of the prostate gland and penis. During the male aging process, approximately 10% of testosterone found in the testes and prostate is converted into DHT. Although made from testosterone, DHT is considered more powerful and can attach with strong and longer bonds to the same sites that testosterone would bind to.

The most common type of loss in men is male pattern baldness. The hair around the temples and the crown of the head slowing start to thin and fall out without replacement hair. Most men call this the M pattern, as the receding hairline takes the shape of an M around the scalp. The specific reasons for balding are still unknown, although there are many factors that contribute to conditions of both hair growth and loss. Successfully addressing conditions of hair loss are largely factored upon identifying the underlying reasons for the condition. In the midst of hormonal, genetic, and environmental factors, DHT is thought to a primary culprit in male balding.

Hair goes through three phases of growth: the anagen, catagen, and telogen phases. The first phase, anagen, is the growth phase. Hairs can be in the phases for up to six years before moving into the catagen phase. The longer hairs are able to stay in the anagen phase, the longer the hair will grow. About 85% of the hair on your head is in the anagen phase at one time.  When the hairs move into the second phase, they only remain there for about two weeks while the hair follicle renews itself. After this occurs, the hairs move into the final telogen phase. This is where the hair follicle rests and lies dormant for anywhere from one to four months. Between 12-20% of your hairs are in this phase at a time. Once the resting phase is complete, the anagen phase begins again. The previous hair is then pushed out of the pores on the scalp by the incoming growth and falls out. It is normal for a person to shed up to 100 hairs a day as a result of the hair growth process and other environmental factors.

When male pattern baldness occurs, the hair follicles shrink, becoming miniaturized and reducing the timeline for the anagen phase. These changes increase the telogen phase where follicle resting occurs. With a shortened growing phase, hairs are no longer able to able to grow to their potential. As time goes on, the anagen phase is shortened so much so that the new hair growth isn’t able to move past the surface of the skin. As the telogen hair growth phase produced weakened root support, it makes it much easier and more noticeable for hairs to fall out. As the follicles continue to shrink, it distorts the production of hair. After a while, hair growth occurs as vellus hairs, which are the soft, light-colored hairs often found on an infant’s scalp that are replaced during puberty and the follicle response to androgens.

For men with high levels of DHT, hair loss is a common side effect. This is sometimes seen in the bodies of those who use anabolic steroid drugs. The hairs of a male head can grow without DHT being present in the body, but androgens are necessary for growing beard hair, pubic hair, and armpit hair. However, too much DHT is damaging to head hair growth, as it is thought to clash with androgen receptors in the hair follicles and trigger the miniaturization of follicles.

Since science believes there is still a genetic component that affects hair growth and loss, the treatment options for those suffering from balding or thinning hair are varied. There are medications on the market to help promote longer androgen phases and encourage the hair to grow back. There are also hair transplants for those with severe balding concerns. With DHT complications, there are medications that can block DHT production and help regulate testosterone levels. The success of the interventions will depend, in part, upon how quickly a man will seek treatment.