Thoughts On the Confusing Stigma of Men’s Hair Loss 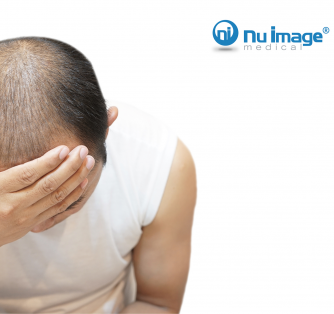 If you look around Hollywood, you may scratch your head in confusion when it comes to the stigma associated with hair loss or the bald head in society. That is because there are many celebrated movie and television stars with bald heads, whether by choice or from acts of nature. These actors are seen as masculine, sexy, strong, and manly, and most have a strong sex appeal with thousands of women around the world. Yes, some actors battled the baldness fight and opted to live with hairpieces or wigs, but for the most part, male baldness is now celebrated around the world as one of the sexy features that men carry so well. So, why is there such a strong stigma attached?

For some men, it is enough to begin shaving their heads the moment signs of hair loss suddenly show up in their lives. For others, it may mean a trip to the doctor’s office here at Nu Image Medical to see about the latest drug to promote hair growth. For a select few, having a bald or shaved head is a matter of celebration, and for some yet unknown reason, the baldness is seen as sexy and masculine. So, what makes some men carry the bald look with such panache, while others struggle to look dignified with hair loss? Is there a sexy gene no one yet knows about? Most importantly, why is there so much distress associated with male baldness or hair loss?

Sadly, research has shown that most of the problems associated with male baldness are due to social conditioning. Men and women around the world look at a strong, healthy head of hair as a sign of virility that has been highly prized for many generations. In fact, losing hair and fighting the coming baldness is hundreds of years old. Ancient Egyptians used herbs missed with hedgehog quills and fingernail scrapings to get their hair back, while ancient Greeks mixed horseradish and nettles with pigeon droppings they applied to their heads. Julius Caesar became obsessed when his locks began to thin, and he tried every type of concoction he could find to remedy the problem. Thus, you can see hair loss is a cultural stigma that dates back for centuries and is still being fought today.

As science began investigating the medical causes of hair loss, they came across some surprising facts about how hair related to hormones and chemicals within the body. While searching for answers began in the 1950s, it wasn’t until the 1980s that a drug often given to lower blood pressure, Minoxidil, was found to have a side benefit of hair growth. The same surprise can from a drug, Finasteride, that was given to men to keep the prostate at a normal size – again, hair growth was a side effect. Armed with information about each of the drugs inadvertent use to grow hair, researchers began to see if the two drugs could be used together to combat the loss of hair. Research is still going on to find bigger and better ways to solve the issue, but for now, using the drugs in combination has allowed Nu Image Medical to bring you the latest efforts medical science has to create products like NuhÓ“r™.

A Matter of Age

It was once thought that hair loss was due to old age, but another surprise that researchers discovered was that the body’s T-cells somehow regulate the growth of hair in mice. The scientists also found that in some people, hair begins to thin in the early 20s and continues slowly throughout life. For others, the hair suddenly begins to thin and does so quickly and efficiently in a matter of months. The differences are still being studied.

The problem associated with finding a cure for baldness is that it is still not understood in the normal and standard physiological reactions and processes within the body. Although some see baldness as a disease, it could be a natural bodily reaction that has become genetically encoded in a certain strain of humans. Baldness could also be a way nature has of identifying specific genetic programming in male bodies that science is still trying to identify. Until the process and its hereditary foundation can be fully recognized, there is no way to say if losing hair is a blessing or a curse. However, until science has come up with a definitive answer, Nu Image Medical will be here to help you keep your hair and potentially help you grow the follicles back in.