Why Nobody Talks About E.D. 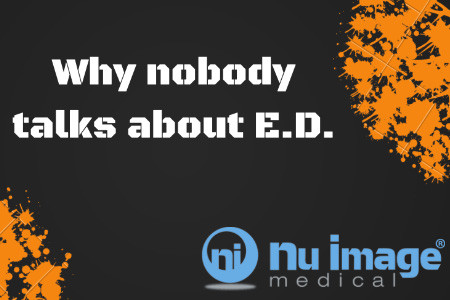 Erectile dysfunction (ED) is a very common concern among men. The percentage of men of a given age who occasionally deal with partial or mild ED is roughly equivalent to their age, so there's a 50-percent chance a 50-year-old man has had ED incidents, for example. That means that if you're in a group of men with more than just two or three of you it's likely someone in the group has suffered from ED. When you add in the particularly high concern the average man has for his sexual performance, it should be a topic of great discussion.

Despite this, men's sexual health is all too often considered a taboo subject which you should not bring up with others. There are several reasons for this unofficial gag order. The first is a larger concern in society about discussing things related to sex, which makes many people uncomfortable. The other is because sexual performance is so tied to masculinity in our society, a man who speaks about their ED may feel emasculated. Unfortunately, this has a spiraling effect. Because men are less likely to discuss their ED incidents, other men suffering from ED are more likely to think they're alone in the struggle, which in turn makes them less likely to share their own experience. If you or your partner has had problems with ED and you don't know where to turn since it's so rarely spoken of, here's what you need to know.

One of the biggest issues with an honest discussion of ED is how misunderstood it is in the first place. When the average person hears about ED they think of a man who is completely unable to attain an erection. While this is true for some men, the majority of ED cases are not total.

Much more common for men with ED are inconsistent erections, incomplete erections or an inability to maintain an erection throughout an entire sexual encounter. Some men with ED may not even realize that such occurrences are a sign of ED and as a result don't think to speak with a medical professional about their treatment options. If you've experienced any of the above, you may benefit from getting on an ED treatment plan.

One area where many men are lacking in their understanding of ED are the potential causes. Both an individual incident or prolonged ED can be attributed to a number of potential causes, including:

•     Blood-related conditions like clogged blood vessels, high blood pressure, heart disease or high cholesterol. When your vascular system is not working at its best it may be unable to properly create and maintain an erection.

•     Substance use, including both cigarettes and alcohol. While such recreational use can feel good at the moment, extended use can lead to performance issues. This can occur both acutely, where short term ED is experienced on a night of excessive use, or as a long term problem caused by consistent use.

•     Physical injury to the groin or other surrounding tissue can also result in a loss of sexual performance capability. This may be a short-term problem which goes away following treatment for the initial injury, but your doctor should be consulted to confirm.

•     Psychological reasons can prevent you from achieving and maintaining an erection. Whether you have anxiety or depression, or you are simply stressed out, the pressure you put on yourself can lead to erection struggles.

Types of Treatments For E.D

If you have been afflicted with ED a doctor can help you to figure out your treatment options. Fixes for ED range from simple pills to manual devices which use vacuum suction to attain an erection. Other options include penile implants, injections or a testosterone replacement therapy treatment plans. With so many options it's likely a fix that works for you is waiting for you to find it.

The Benefits of E.D. Treatment

The primary benefit of an ED treatment program like Mt. Everest is apparent, but there's more to be gained than simply achieving firmer and longer-lasting erections. Your sexual health can play a big role in maintaining overall fitness. Not only is sex a great way to get physically active, but it also generates both mental and hormonal benefits as well. When you restore your form in the bedroom you give your entire body a boost.