Closing the Gender Gap in Alopecia 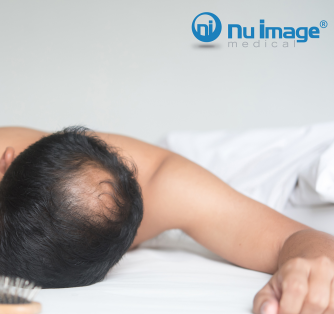 Social culture has been placing increased emphasis on gender equality, but there is one area where men and women have long been on equal playing fields. Ready for the big reveal? It’s hair loss. For years the assumption has been that only men suffer from baldness and concerns of serious thinning, but the statistics show that women are just as susceptible to losing their hair like men. Although the term for a significant loss in women is called female pattern baldness and the term for loss in men is called male pattern baldness, the medical condition for both is androgenetic alopecia.

What Happens in Males

Though many think that balding starts as an individual reaches old age, many men will begin to notice their hair thinning out around the temples in an ‘M’ pattern as early as their 20s. The rate and severity of a receding hairline with being different from one man to the next, as there are many factors that can impact loss. There are some men who can become bald within five years of developing the condition, while it may take others a decade or more before completing losing all their hair. The average length of time it takes to go from a full head of hair to nothing left is between 15-25 years. The loss is more noticeable in the front around the forehead and moves back toward the crown as time progresses. The hair follicles around the side and back of the head withstand the condition the longest, so it is common to see men with a bald crown and yet a strong growth in the back.  Research has shown the androgen hormone DHT plays a role in the development of androgenetic alopecia, making it a genetic condition. Men have higher levels of androgen hormones in their bodies than females, which is why females will experience hair loss a little bit differently than men.

What Happens in Females

Most cases of severe or total baldness in women aren’t attributed to a genetic condition but the impact of medications or treatments like chemotherapy on hair follicles. When female pattern baldness starts, the first sign is usually thinning around the middle of the scalp. The structure of the hair starts to change, becoming more thin and fine. The hair will also grow sparse, as strands that fall out aren’t replaced with new growth. Thinning hair also starts around the ears and the side areas of the scalp over the temples. Unlike men, females don’t usually their hair around the hairline. There can be isolated patches of baldness, as hair follicles in a specific area may start to shrink and stop producing or regrowing hair. Women also notice problems with loss or thinning much later in life than men do, generally experiencing problems within their 50s or 60s. However, a loss that isn’t related to a genetic condition can create hair problems much earlier in life.

There are many other things that can impact your hair health. Certain medications play a role in reducing the life span of hair production, just as can a poor diet and lack of nutrition. Hair follicles are tiny organs that need a range of vitamins and minerals to stay healthy and strong, moving between the phases of hair growth normally. Harsh chemical exposures or hair care routines and styles that tug, pull, and overheat your hair can also cause problems with thinning. Things that you can do to prevent this type of loss include proper hair hygiene, a well-balanced diet, lower stress levels, and hairstyles that work with your hair type.

While baldness and loss haven’t been completely eliminated as a medical problem, there are treatment plans that address the specific factors impacting your hair health. Several hair products have been developed to stop the production of DHT and allow hair follicles to regain their strength and productive ability. Medicated applications include minoxidil and finasteride, and although they were originally just for use in men, the configuration of minoxidil has been altered to provide females a defense against hair loss. Finasteride is usually taken as an oral medication, and there are shampoos and foams that can be used to help regrow natural hair. For more serious cases of loss, hair transplants are another option.

Talking to a physician about your hair concerns can help determine what treatment option you will need. Your loss may be related to a number of lifestyle factors that need to be adjusted. You could also have a medical or genetic condition that will require a more focused treatment plan. Whatever the cause may be, you don’t have to suffer from baldness or thinning hair.