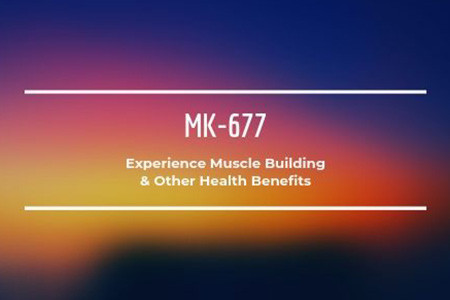 Once we’re done with puberty, our body’s human growth hormone (HGH) secretion levels decline drastically. By the time we reach the age of 30, our HGH levels are only about 20% of their peak levels, and after the age of 30, they continue to decline at around 15% per decade. But, we can reverse that.

Peptides stimulate HGH production, which has a healing and rejuvenating effect on bones, joints, and tissues. They work alongside the body to correct HGH deficiencies. HGH helps to maintain, build, and repair healthy tissue in the brain and other organs, as well as speed up healing after an injury. HGH is also vital to repair muscle tissue after exercise and helps to build muscle mass, boost metabolism, and burn fat.

Over the course of several articles, we are introducing you to 6 powerful peptides people love.

MK-677 is one of the most popular compounds on the market today. It is also commonly referred to as Ibutamoren or Nutrabol.

One of the most notable claims made about MK-677 is that it can increase the secretion of growth factors-1 (IGF-1) and HGH. It works by imitating the activity of the ghrelin hormone. Ghrelin, also called the "hunger hormone,” regulates appetite and plays a significant role in regulating energy distribution, metabolizing fat, and influencing our ability to recover from conditions such as Type 2 diabetes and obesity.

By imitating the way the ghrelin hormone works, MK-677 stimulates the production of HGH in the brain. It does this without disrupting the action of other hormones in your body such as cortisol and testosterone, which is a huge bonus considering its benefits.

MK-677 is popular for its anabolic properties. It promotes the lean gains that most athletes desire. These effects are activated when the MK-677 compound is taken orally every day.

In a blind controlled trial,  24 obese men were given MK-677 over a period of two months. Within that time, the participants showed an increase in their basal metabolic rate (BMR) and they had more lean muscle mass.

That’s because MK-677 not only boosts IGF-1 levels, but it increases growth hormone production as well. That leads to increase muscle size and strength while significantly reducing the amount of body fat you have.

Athletes "burn" energy in the pursuit of their goals. This is what scientists refer to as oxidation. The oxidation of fat is when the body’s fat is turned into energy. When our body uses its own fat for fuel, energy levels increase and leaves muscle mass untouched. MK-677 increases hunger through the imitation of ghrelin activity, and also oxidizes fat.

MK-677 also has been shown to reverse protein loss and muscle wasting that many people experience as a result of diet and lifestyle. Muscle atrophy may also be the result of aging and physical inactivity of muscles. MK-677 can help restore muscles, allowing them to grow, bulk up and become stronger. It has been proven to reduce the number of falls experienced by older patients as they gain increasing muscle strength.

Because HGH can increase bone density, using MK-677 to stimulate higher levels of HGH can improve the body’s ability to build stronger bones. This may be good news for post-menopausal women who found that MK-677 can significantly improve bone strength through increased mineral density. That means MK-677 may be helpful in preventing osteoporosis in older women.

MK-677 can improve the quality and quantity of REM sleep. Aside from the scientific evidence, there’s plenty of anecdotal evidence to support this claim. Many users have experienced improved sleep as a result of taking MK-677.

We all know that sleep is an important part of health, wellness, and the body’s ability to build itself. Good sleep allows us to recover more quickly and gain strength for the next training session.

MK-677 is a potent, long-acting peptide compound, and the correct dosing and usage is essential. When dosed properly, the side effects of MK-677 are minimal to none.

Side effects of MK-677 are usually the result of two things: improper dosage and extended use.

Reported side effects of MK-677 are typically the result of unnaturally high levels of growth hormone in the body from taking too much too often. These side effects include:

Before You Buy: What You Need to Know about MK-677

MK-677 is ideal for those over 30 who exercise and live a healthy lifestyle. Although there are over-the-counter MK-677 supplements, we recommend only using 100% pure peptides that are compounded her in the United States. This assures that you are getting a pure product with accurate dosing that has been prescribed by a physician.  Before you make a purchase, do your research.

If you think MK-677 may be right for you, you can begin building your medical profile now on our website. Requesting a telehealth consult with one of our licensed doctors is a step in the right direction.