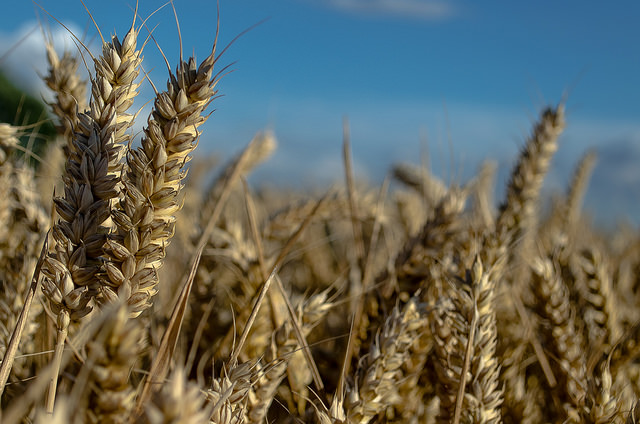 Studies continue to show that giving up wheat (along with starch) is one of the quickest ways to reduce stubborn body fat and help your metabolism return to normal. Wheat, including whole grain wheat, has been found to have several compounds that affect your metabolism and body in several negative ways, and research continues to show that wheat causes obesity in spite of contrary claims that whole wheat foods are perfectly healthy.

A meal of mostly wheat foods like bagels, muffins or waffles will always give you a quick burst of energy followed by a quick drop off, while foods like eggs, steak and high protein meals are digested more gradually and provide a stable source of energy.

Gluten is one of the problems with wheat

You've probably heard about the problems that gluten can cause, and gluten is a protein found in wheat and other grains. Gluten gives wheat products their chewy texture and helps dough rise. People who Celiac disease are allergic to gluten and cannot consume it without having a significant immune reaction which leads to inflammation throughout the body.

Gluten can be harmful to your health even for those who don't have Celiac disease. The way to tell if gluten is a problem is to avoid consuming it for an extended period of time and notice if your health improves. If you find that you start losing weight or even small symptoms like congestion and digestive problems improve, there is a good chance that you may have a gluten sensitivity. Gluten is certainly one of the main problems with wheat, but it is not the only problem.

Wheat has compounds that make it addictive

Wheat has compounds that actually stimulate your appetite and have a similar effect as a "runner's high". The gliadin in wheat is converted to exorphins which are similar to the endorphins that are released when you exercise for an extended period of time. These compounds are what causes people to "binge eat" on cookies and desserts, and it makes eating wheat products that much worse.

The exorphins can also pass the blood brain barrier and influence the brain, which is one reason why some researchers believe that wheat consumption is linked to depression, anxiety and mood disorders. In one study, people who were on a drug used to block morphine in cases of an overdose and who were also binge eaters ate 30% less food than normal. It proves that wheat has a drug like effect on the body and this effect makes wheat products tempting but also dangerously addictive.

You should try to rid yourself of wheat as much as you can and notice if you lose weight, but it may not be enough.   First, there is no substitute for exercise, and even if you have a relatively healthy diet you will benefit from just a moderate level of exercise at least 3 times per week, which can include running, biking, recreational sports, or whatever your favorite form of exercise is.

You also need to be cautious of your carbohydrate intake, and wheat of course is not the only source of carbohydrates. Any foods with refined sugar should be completely avoided when you are trying to lose weight of course, but even foods that are high in starch including corn, rice and potatoes should ideally be eliminated from your diet when you are trying to lose weight.

There are many other dietary issues to take into account including dairy consumption, which is perfectly fine for some people but can cause weight gain for other people and insulin sensitivity to particular foods. This is one reason why the HCG diet is so effective; because it limits your food intake specifically to foods that are not known to cause weight gain or other metabolic problems. As a result it is an excellent way to see if you actually do have any food sensitivities.

As you reincorporate foods back into your diet you can take note if you have any adverse effects or symptoms, and if you do the chances are that you may have a sensitivity to that particular food. No matter what, you should almost always avoid wheat consumption, and the majority of people experience at least some health benefits when they eliminate wheat and starches from the diet.

Wheat is in many foods

The HCG diet and many other diets require you to give up wheat because it has been known for many decades that wheat contributes to body fat. The recommendation is that you continue to limit your intake of grains and wheat foods and starches even after the diet is over. If you do resume eating grains after you have dieted you will gain the weight you lost back most of the time.

Even foods that have been marketed as "gluten free" still have large amounts of carbohydrates and may have other wheat proteins, so it is not enough to eat processed or pre-packaged gluten free foods. Instead you need to limit your foods to natural sources as much as possible, ideally altogether, and reduce your consumption of any processed foods that may have wheat in them, including gluten-free products that may have high amounts of sugar or carbohydrates.

After you eliminate "problem foods" including wheat and starches you need to be careful to watch your weight when incorporating other foods in to your diet. At Nu Image Medical we have designed our HCG diet program to carefully reintroduce foods after a 23 to 43 day period. On the diet you may experience rapid weight loss since it avoids sugar, dairy and wheat products, and the program is easy to follow with everything laid out for you. To learn more information about how the HCG diet can help you lose stubborn body fat or to speak to one of our medical professionals, click here.