Can Your Genetics Affect Your Weight? 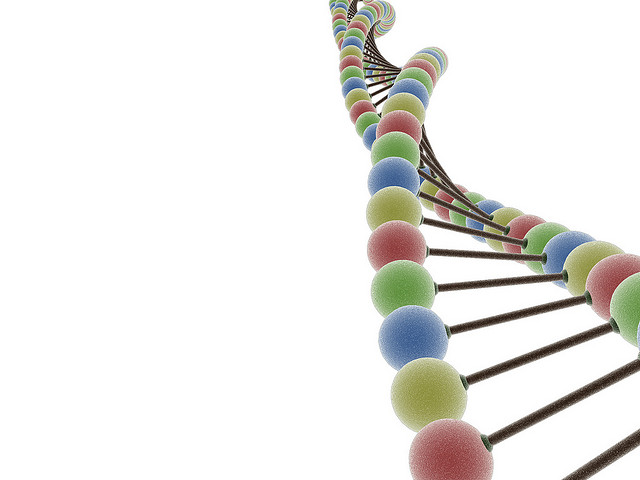 Your genetics certainly do play a role in your weight, but some people believe that genetics influence weight more than anything, which is not true. Genetics certainly do play a role in weight, and that role  is not very well understood, but a few specific genes have been associated with obesity in some groups of people. That certainly doesn't mean that if you are a member of those genetic groups that you are guaranteed to gain weight; your genetics are only a small factor in weight gain but they can certainly affect your weight to some extent (most experts say about 50% of your weight or slightly more or less is genetically influenced). No matter what, any effect that your genetics have on your weight can be overcome by changing your lifestyle, your diet and increasing the amount of exercise that you do on a regular basis.

Genetics play a complicated role that has not been fully understood at this point. Scientists have found some genes that are associated with obesity, and there are several genetic mutations that run in families that have a history of obesity. However, most scientists agree that the risk of obesity has mostly to do with your diet and lifestyle rather than your genetics, and that genetics may account for 50% of your risk or so, while you control the other 50%. The reality is that over 30% of Americans are obese and if you are from a family with a history of obesity it doesn't mean that you are doomed to be obese, but those with a genetic predisposition to obesity may have a more difficult time with weight control, which likely has something to do with leptin production.

Leptin resistance may have something to do with obesity

There are some groups of people who have a genetic predisposition to having a resistance to leptin, the hormone that controls satiety. Leptin is released by the adipose or fat tissue in the body and it sends the signal to our brain that we are full, and it is thought to be the single most important hormone in regard to appetite. Also, the more adipose tissue that you have, the more leptin that your body produces, and the greater the chance that you can develop leptin resistance. People with a predisposition to obesity also have genes that may produce a higher continual level of leptin than most people, and the end result is that the brain starts to become less and less sensitive to the hormone and it becomes more difficult to control appetite and feel full after eating.

It's a lot easier to prevent obesity

Obesity is much easier to prevent than it is to treat for several reasons. Exercising and dieting once you are obese can result in a metabolic slow-down that can last for several weeks or even months; no one is really sure how long it lasts. Diets like the HCG diet are designed to prevent this from occurring, and many of the people who lose weight on the diet can keep it off because the hormone helps to regulate fat metabolism and stop it from slowing down. Other methods of weight loss for obese people end up being ineffective in the long term because the body resists them with everything it has. It takes more effort for an obese person to lose weight and keep the weight off than for a normal weight person because they have more weight to lose, and the body reaches a "set point" where it becomes stabilized and metabolically balanced at an unhealthy weight.

Lifestyle is more important than genetics

Many studies on genetic obesity continue to prove that lifestyle is just as important if not more important than genetics, and that no one has the excuse that "bad genes" are the cause for their obesity. Families with a genetic link to obesity often have various lifestyle factors that also contribute to obesity such as a poor diet that is high in sugar, grains and other simple carbohydrates, a sedentary lifestyle or a lack of exercise, a lack of sleep and poor eating habits. Focusing on controlling your lifestyle is much more important to fighting obesity than worrying about genetics since you can't change your genetics, and although you may have a more difficult time losing weight than a person without that genetic predisposition, it is far from impossible. It is also helpful for obese people to work with a medical doctor or a clinic so that they can get a professional review of the lifestyle factors that may be contributing to their obesity along with a plan to change those factors.

Start exercising as soon as you can

At the age of 30 most people's genetics start to play a bigger role in their weight and their predisposition to illnesses, and whether you are older or younger than 30 you should be exercising as much as you possibly can. The more that you exercise the better, but most studies show that around 200 to 300 minutes of exercise per week are ideal. Exercise has proven to be one of the best things to do to combat a genetic predisposition to obesity. One study tracked 12 genes that were known to contribute to obesity across 20,000 people, and the study found that exercising can reduce the chance of obesity by 40 percent. Even exercising as little as 30 minutes per day proved to be effective at weight control. Another study of the Amish people who have the FTO gene, a gene that is associated with obesity, found that the physically active people among them had almost the same chance of obesity as those without the gene.

Even if you don't have a genetic predisposition you should exercise

People who don't have a genetic predisposition to obesity should still exercise, because carrying around even a small amount of extra weight, especially in the abdominal area, can be very dangerous and increase your risk of a wide range of different chronic illnesses. Just a small amount of regular exercise, about 30 minutes every day or 45 minutes every other day can greatly offset your risk of developing diabetes or heart disease. People who don't have a predisposition to obesity but who have a sedentary lifestyle need to be extra cautious, because you can still be at a seemingly normal weight but you may have a high body fat percentage or a large amount of visceral fat. The basic idea is that everyone who is able to exercise should do it regularly to prevent premature aging and diseases.

The HCG diet is an effective solution for people with a family history of obesity, and the diet has successfully treated thousands of obese patients. The HCG diet is unique because it affects hormone production, and it may certainly have an effect in leptin production although this effect has not been clearly studied. One thing is for sure, obese patients who try the HCG diet have excellent results both in the short term and long term, and they end up keeping their weight off in the majority of cases. The hormone may reduce leptin resistance by rapidly reducing body fat in a similar way that it can reduce insulin resistance for pre-diabetic patients. The resistance that people normally encounter with other weight loss methods is easily overcome with the HCG diet because the hormone itself helps to suppress the appetite and very likely reduces the effect of leptin resistance. Get free information about the HCG diet here.