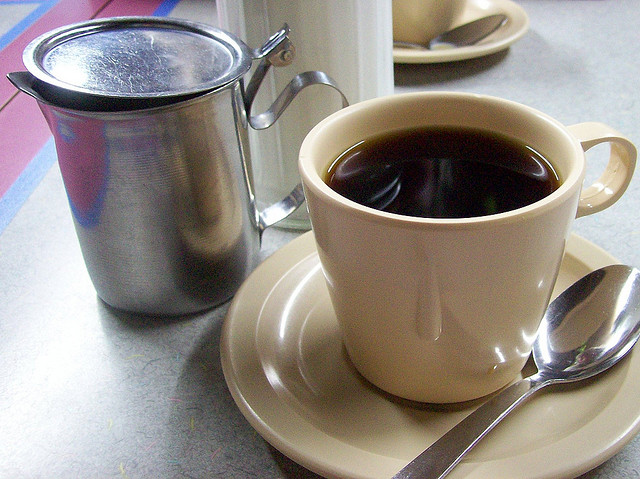 Can  coffee help with weight loss?

Some studies suggest that a moderate intake of coffee on a daily basis can be beneficial for a small amount of weight loss, while other studies suggest that too much coffee can actually lead to weight gain in some situations.  Coffee is one of the most popular beverages in the world, and research suggests that people who drink it on a moderate basis may experience a light to moderate weight loss benefit as well as several protective benefits including a lower chance of developing chronic illnesses and degenerative neurological disorders.

How coffee can help with weight loss

The caffeine in coffee also suppresses the appetite. This is helpful whenever you are on a low calorie diet such as the HCG diet, but it is also beneficial when you aren't dieting. With the appetite suppression effect of coffee you are less likely to snack on something unhealthy, and it can hold you over until your next meal.

In one study published in PhytothÃ©rapie, a French scientific journal, 400mg of green coffee extract was given to one group, while another group received a placebo. Both groups supplemented for 60 days, and the study found that the group that received the 400mg of green coffee extract lost 2.9% more weight than the group that received the placebo. Interestingly, in this study the 400mg extract was decaffeinated, which suggests that the other compounds in coffee contrtibute to weight loss on top caffeine which is already proven to result in the weight loss benefits mentioned above.

Coffee is known to protect against several diseases as well. It is thought to help prevent Parkinson's disease, Alzheimer's and mild depression. It can also lower your risk of diabetes, lower your blood pressure, reduce your risk of liver, colon and rectal cancer. It is also one of the richest sources of antioxidants in the Western diet because it is consumed in such high quantities and because it has a large concentration of compounds called quinines which are powerful antioxidants.

When coffee can be bad for weight loss

Too much of a good thing can be bad, and coffee can definitely be harmful when consumed in excess. An 8 ounce cup of coffee has anywhere from 100 to 200mg of caffeine depending on how it is brewed, and the maximum recommended intake of caffeine is 600mg per day, although some people have a lower tolerance than this. Those who are particularly sensitive to the effects of caffeine should avoid drinking coffee; there are plenty of other ways to lose weight.

Even for those who are not sensitive to caffeine, too much of it will cause symptoms like anxiety, restlessness, irritability, and insomnia. At very high doses it can cause cardiac arrhythmias. People who participant in competitive sports are advised to not drink coffee prior to competing, however some people may be able to safely drink it prior to working out.

Coffee should always be consumed with plenty of water, as it is a diuretic and can result in dehydration. It's also advisable to avoid drinking coffee after 3:00 p.m. as it takes approximately 6 hours for the energy boosting effect of caffeine to wear off, and it can easily disrupt sleep cycles and then cause more damage than good. Disrupted sleep cycles can of course lead to several health problems, one of which is actually weight gain as the body produces more of a hormone called ghrelin which is an appetite stimulant.

In addition to being careful with how much and when you consume coffee, you have to be very careful with using sweeteners as well as dairy if you are trying to lose weight. It isn't necessarily the saturated fat in dairy that can be harmful, as research is starting to show that saturated fat isn't as bad as we once thought it was, and there are over a dozen different types of saturated fat so not all saturated fat is created equal.

If you do decide to use cream or milk, make sure that the dairy products you are using are organic if possible. Milk from cows that have been grass fed and raised without growth hormones and antibiotics has a higher amount of beneficial omega-3 fatty acids and a lower amount of damaging omega-6 fatty acids.

The best way to ensure that you get the weight loss benefits of coffee is to make it yourself. Use high quality organic coffee and limit your consumption to two to three cups per day maximum. Stevia is the best sweetener to use, and if you don't like stevia it is much better to drink coffee black than to use an artificial sweetener or a sweetener with carbohydrates. If you do use milk, it's always best to use organic milk, and pay more attention to whether or not the milk is organic rather than the fat content.