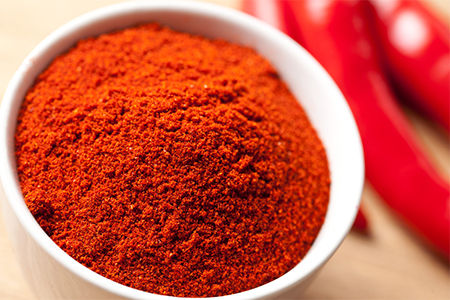 On the HCG diet you are allowed to use several different herbs and spices and many of them help your body burn fat more effectively in addition to adding flavor to your food with very few calories. Studies have shown that various spices and herbs can increase your energy levels, regulate blood sugar, increase your metabolic rate and more.

So don't neglect using spices and be generous with them to experience their fat burning properties. Below are 9 of the most effective fat burning spices  that can help you lose weight, each one has  dozens of other health benefits as an extra incentive to use them..

Garlic has been shown to be helpful for improving carbohydrate metabolism and it helps slow down eating. It has weight loss benefits both in the natural and powdered form, and a compound in garlic called allicin helps reduce cholesterol. Crush fresh garlic and allow it to sit for at least 8 to 10 minutes in the air which helps it produce extra health benefitting compounds.

Cayenne pepper helps boost your fat metabolism by increasing your body temperature. Your body burns more calories as it increases in temperature. Adding cayenne to food also makes the food more difficult to eat in large quantities, and it has a ton of other health boosting effects like increasing the immune system, regulating blood pressure, and more. It can be taken as a supplement, as a spice or in tea form (if you haven't drank the tea before start with a small quantity at first).

Just one teaspoon of dried mustard can boost your metabolism by up to 25 percent or more. It can help you burn an extra 40 to 45 calories each hour. The fat burning effect of mustard comes from compounds called isothiocyanates which increase the production of ephedrine, a natural fat burning hormone and also causes blood vessel dilation.

Technically this is a seasoning and not a spice, but we couldn't leave it out. Apple cider vinegar is thought to have several effects on the body that can help reduce fat production. The acetic acid in the vinegar helps the body metabolize starch, and drinking some of it before eating can help with starch metabolism. Also, it is a good source of pectin, a natural fiber that can reduce appetite. The acids in apple cider vinegar also help the body digest and metabolize protein and may help the body produce growth hormone which in turn boosts fat metabolism.

Black pepper is now known to be effective at increasing fat metabolism and it also increases the effectiveness of digestion. Studies show that a compound in black pepper called piperine may stop the formation of new fat cells. Other animal studies suggest that piperine may also improve glucose metabolism, liver function, and help maintain a normal blood pressure.

Curcumin or turmeric is known to be one of the absolute best weight loss spices. Organic curcumin is best, and studies have shown that it stops the production of fat by reducing the synthesis of blood vessels that are needed to create new fat cells. It is also known to reduce inflammation levels, and inflammation is associated with conditions that can lead to obesity such as diabetes and hyperlipidemia. Being obese also usually results in a chronic low level of inflammation, and curcumin helps to regulate that inflammation and reduce it, which in turn reduces susceptibility to chronic illnesses.

The zest or the peel of the lemon is known to be nutrient rich and is commonly added to many recipes for its unique sharp citrus flavor. Lemon zest helps to boost metabolism by reducing the absorption of sugar. It contains a compound called policosanol which is a compound that is useful for the fat burning process and helps to regulate cholesterol levels. A drink made with lemon juice, cayenne and lemon zest has can boost the metabolism and burn fat and increase body temperature which burns even more calories, with the many other health benefits of lemon juice and cayenne.

Cinnamon should be used regularly because it has several health benefits including one of the best blood sugar regulation effects. In some ways it mimics the effect of insulin and helps the body metabolize glucose, which is why it is such a great addition to foods with carbohydrates if you have to eat carbs. It can also slow down the absorption of glucose and other nutrients in the intestine, which allows the body to properly metabolize nutrients. Some studies suggest that cinnamon can help prevent the development the dreaded abdominal fat. One to two teaspoons of cinnamon per day can have these health benefits, but it can also be consumed in capsule form or as a tea.

Ginger powder or fresh ginger has dozens of health benefits including increased insulin sensitivity which reduces blood sugar levels and increases sugar metabolism which maintains weight stability. It is also thought to boost the metabolism by up to 20 percent or more for an extended period of time, and some people think that it can help reduce appetite. The metabolism boosting effect of ginger may combine with other spices like cayenne, and as an extra benefit it boosts the immune system and helps with digestion.

If you haven't been using spices and herbs to add flavor to your food you should be thinking about it now. They can be found almost anywhere and you should use as much of them as you can in your recipes to get their maximum weight loss benefits.

These spices are an easy way to help you stay thin because they add more flavor to food without adding extra calories like fats and other flavorings. To ensure that you get the health benefits and fat burning effects of these spices, increase their recommended amounts in recipes as much as you can tolerate, or try taking them in a capsule form or as a tea. To get started on the HCG diet, which allows you to use these spices to help you burn weight and stay healthy, click here.