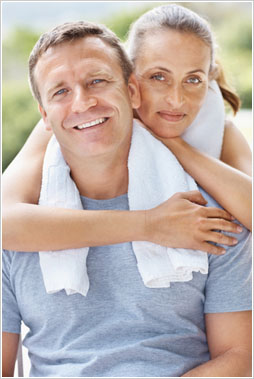 Sermorelin vs HGH – Know The Difference

Human Growth Hormone, also known as hGH, has been utilized in recent years as a therapy for anti-aging. This particular growth hormone, produced by recombinant gene technology, is given to help restore youthful vitality making patients feel and look younger. Even though it has been proven effective for the aging patient, supplemental human growth hormone can unfortunately lead to medical and legal problems when used. Here are some main differences with Sermorelin vs HGH.

Key problems associated with hGH use include the following:

This all being said, there may be an alternative therapy that bypasses legal restriction and medical problems… Sermorelin is a form of Growth Releasing Factor (GRF). Sermorelin is a small peptide containing only 29 amino acids while hGH, on the other hand, is a large molecule containing 191 amino acids. However, studies have shown that it is only the first 29 amino acids out of the full 44 amino acids in GRF that stimulate pituitary secretion of human growth hormone. Therefore, the chemical name of Sermorelin is GRH 1-29. Sermorelin is currently the only product currently available that has the ability to enhance the effects of hGH.

In HGH Therapy, the main difference is Sermorelin is a secretagogue. This means, it is not growth hormone itself, but it actually stimulates the pituitary gland to produce more growth hormone naturally. This gives the body the benefits of hGH without giving the actual hormone. This bypass of injected hGH prevents many problems. Unlike Sermorelin, when you use hgh injections, it accumulates in the body. Levels of exogenous hormone increase for a while and then drop back down suddenly. Patients taking HGH often experience benefits for a period of time and then the effects abruptly stop. It then takes more and more medication to produce the same original effect, and taking too much can lead to severe HGH side effects. Because Sermorelin stimulates growth hormone production naturally, it is typically much more safe than hGH. With Sermorelin, the body attempts to self regulate how much or how high hormone levels can get. This type of regulation is referred to as normal feedback; a protection mechanism of the body. When levels, get too high, normal feedback mechanisms help bring levels to a more safe and steady state. This regulation of the body prevents the “square wave” pattern seen with hGH, thus preventing sudden drops of hormone levels.

There are over the counter secretagogues that are said to increase HGH levels much like Sermorelin. These products such as L-glutamine, L-dopa, L-arganine, L-orirnithine, glycine, ornithine alpha-ketoglutarate and herbs such as Macuna pruriens and Tribulus terrestris are amino acids that, in high doses, may elicit a small release of HGH from the pituitary. However, their effect is non-specific and typically intermittent and unreliable because they do not work on any specific receptor on the pituitary gland. High doses of amino acids can also produce kidney problems. Because Sermorelin’s action mimics the body’s naturally occurring growth hormone releasing process, this is not an issue.

The only method of administration currently available for Sermorelin is by subcutaneous injection. However, it is a much smaller molecule than HGH, and it may be possible in the future to administer it through the nasal mucosa with a spray form. Even though HGH and Sermorelin work at different places in the body (Sermorelin at the pituitary and HGH at the liver), the dosages are comparable. It takes the same amount of material of both products to raise the serum IGF-1. Typically, Sermorelin is prescribed in micrograms and HGH in international units (IU). Sermorelin cost is also much lower than HGH, and one vial of Sermorelin provides more daily doses than one vial of HGH. The timing of the daily Sermorelin injection is also important. Sermorelin is given once a day at bedtime. Timing the injection prior to sleep is important because Sermorelin complements the body’s natural production and release of Growth Releasing Factor during sleep.

In the battle of Sermorelin vs HGH, it is clear using Sermorelin in place of hGH has numerous benefits. It not only is cost effective and easier to obtain, but it is more importantly a more safe as well as effective supplement for increased growth hormone production within the body.

Let our team lead you in the right direction as we work together towards a healthier you!