Look as Young as You Feel with HGH 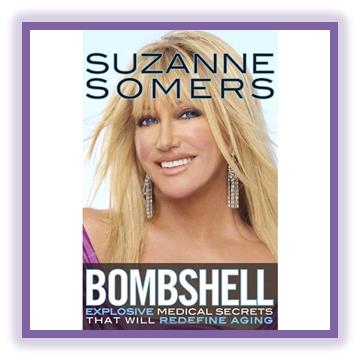 The big secret that age defying enthusiast, Suzanne Somers and countless other celebrities are using to stay young and fight the aging process.

As we get older, changes in our skin become inevitable. Wrinkles and fine lines may appear suddenly and skin may begin to sag. It can be very frustrating to feel so young and yet, look in the mirror only to see someone you don't even recognize. Getting older is expected, but what if aging skin wasn't a part of that process? There are numerous lotions, creams, and oils available today that claim to improve collagen and skin elasticity, but do they really work? Even the most expensive topical creams are limited as to what they can do for your skin. They may minimize fine lines. However, most provide only a temporary solution or covering to an underlying problem. They are limited to the skin's surface and cannot affect areas deeper than just the outer layer of skin. Botox or dermal fillers have been proven to reduce wrinkles, but again, this is just a temporary solution to a problem that will keep getting worse and will eventually lead to more treatments. Liver or age spots can also often develop on the skin in addition to fine lines and wrinkles. These spots, unfortunately, tend to worsen over time and lead to uneven skin texture and tone.

The race is on in today's youth fixated culture to provide the best way to fight premature signs of aging, and many top name celebrities may have found the key that could unlock a lot of answers to these common problems. The solution you may ask? It actually may surprise you. This highly favored, age fighting, miracle skin solution is none other than HGH, also known as human growth hormone. Using growth hormone for skin rejuvenation may actually be a real, medical solution to a real medical problem that is often overlooked and under diagnosed.

The endocrine system itself is one of the most important influences involved in skin aging. The endocrine system functions as a regulator and producer of hormones. These hormones tend to decline, sometimes significantly, with age. Hormones are vital messengers for important body functions such as growth, reproduction, metabolism, etc. There are many extrinsic, or outside factors that contribute to the aging process such as ultraviolet radiation (UV), harsh weather, pollution, lifestyle, etc. That being said, it is always important to do your best to protect your skin from harsh elements with items like sunscreen and daily moisturizers. But there is also a lot to be said for the effects of intrinsic aging as well. Meaning, the aging that happens within the body overtime that in turn, reflects on the outside. Up until recently, did we believe that anything could be done to avoid these unfortunate effects that just "come with age." Fine wrinkling, paleness, skin dryness, etc. are all factors of intrinsic/biological skin aging.

As we get older, and even more specifically once we hit the age of 30, hormones naturally start declining within the body. Because of the many functions that hormones contribute to, many changes in the body may suddenly become more noticeable. However, changes in the skin are often overlooked especially in this key time when this issue should be promptly addressed. Hormone decline is responsible for a huge decrease in collagen production and also a decrease in fibroblasts, which leads to a loss of skin elasticity and firmness. As our biological clock ticks away, skin may begin to gradually lose its ability to function as it once did.

The pressure to stay and look young has never been more prominent, especially in Hollywood and in the public eye where appearance and body image is highly valued. Supplementing hormones and addressing skin aging from the inside versus continually on the outside has proven to produce unsurpassable results. By essentially reversing the lack of hormones, the body has shown to be able to better maintain its youthful appearance. HGH is a hormone naturally produced by the body, and much like other hormones within the body, levels may fall with age. HGH is responsible for very important functions within the body such as immune system function, bone growth and tissue repair, energy, weight loss, libido, etc. In recent years, HGH has become more talked about in the media. In 2008, the Albany Times Union stated that celebrities such as Tyler Perry, Mary J. Blige, 50 Cent, Timbaland, and even Sylvester Stallone were just a few public figures found amidst tens of thousands of people said to have received shipments of HGH. And the biggest factor is that they stand behind their reasons for taking the hormone. HGH produces noticeable effects. They have enjoyed not only a healthier and more youthful complexion, but they have also reported to have increased energy, less aches and pains, body fat loss, etc. Suzanne Sommers is probably the most well known in the media for her anti-aging advocacy. In 2006, Sommers started promoting HGH and its benefits not only in anti-aging, but also its youthful vitality benefits. Doctors and skeptics were quick to disapprove of her efforts, but apparently a lot of people were paying close attention and eventually jumped on the bandwagon as her book ranked #1 on the New York Times Best Seller List during its debut.

Unfortunately, the price of HGH itself can be costly and can also become dangerous if not dosed properly, which is why most patients are turning to prescription secretagogues like Sermorelin to increase HGH levels. As a secretagogue, Sermorelin stimulates the body's pituitary gland to produce more HGH naturally on its own. So without giving continuous high and possibly dangerous amounts of exogenous, synthetic HGH, the body is able to increase its own HGH and regulate levels from within more easily while still allowing the individual to experience all the benefits of HGH without the extreme cost or dangers of toxicity. Skin improvement is just one of many proven incredible benefits of increased growth hormone levels. With HGH, it just may be possible to turn back the clock.

You can read more about HGH Therapy here or Buy Sermorelin