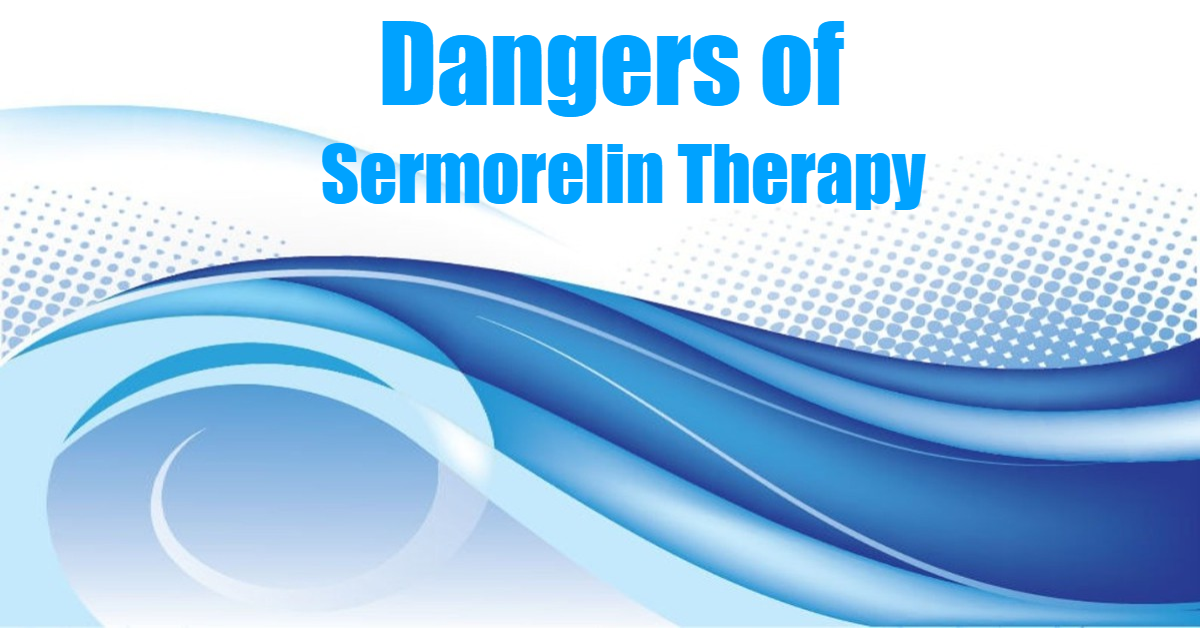 Sermorelin therapy is an alternative to standard HGH therapy and has become one of the most popular forms of the therapy today. Like most other types of hormone therapy, there is a concern for potential risks or dangers, but Sermorelin happens to be one of the safest forms of HGH therapy if not the safest, and there are few to minimal side effects associated with the treatment. Most patients who have participated in a Sermorelin treatment program have demonstrated minimal symptoms and side effects, and it is thought to be one of the least symptomatic forms of hormone treatment because it aims to increase the brain's natural production of the hormone rather than injecting the hormone directly to increase it artificially.

Sermorelin Therapy has Few Side Effects and Dangers

Sermorelin therapy has been selected as an alternative to HGH therapy because it has such few side effects in comparison. As long as the therapy is purchased from a reputable provider, it is known to be safe. Sermorelin therapy can be used in several different medical circumstances but it is mainly used as an anti-aging treatment, and the amount of Sermorelin that is administered per treatment is relatively low. Sermorelin works by stimulating the brain to produce HGH naturally, and as a result, there are very few side effects since the hormone that is produced is 100% natural. Most of the effects seen from the treatment are positive including increased muscle mass, decreased body fat, increased natural HGH production, and more.

Sermorelin should only be purchased from a reputable source

Because of the fact that the treatment has been in high demand in recent years, there has been a rapid increase in Sermorelin providers, many of which sell the hormone without a medical license. As a result, there are several treatments that are potentially unsafe because the hormone used may not be legitimate, or it may be sourced from an unknown pharmacy. Because of the potential complications of an unsafe hormone treatment, Sermorelin should only ever be used under the supervision of a medical provider with experience administering the treatment. There are several providers located in the United States, such as Nu Image Medical that uses 100% safe and pharmaceutical grade Sermorelin.

Sermorelin can safely be administered from home

Once prescribed and approved, the treatment can easily be administered from home. Sermorelin therapy requires daily injections, and the injections are given via a small needle, similar to the same type of needle that a diabetic uses regularly. The self-administered injections are relatively painless and the medical provider who is overseeing the treatment will give the patient information and instructions on how to safely self-inject the hormone at home. Typically just one injection is required per day, and the treatment usually continues for one to three months. The self-injection protocol saves the patient both time and money, and many Sermorelin therapy programs can be purchased from home safely.

The dosage must be carefully selected

One unique aspect of the treatment is that the dosage must be carefully selected, and as a result, patients cannot safely administer the treatment without the advice and guidance of a medical provider. At Nu Image Medical, patients must undergo a full medical consultation prior to starting the treatment including a blood test at the start. The blood test ensures that the proper dosage is selected based on the HGH deficiency. There certainly is a potential danger with the treatment if a patient tries to self-administer Sermorelin therapy without first consulting with a medical provider. There is a potential risk of picking a dosage that is too high or even potentially too low. The quality of the Sermorelin product may also be questionable if it is purchased from a provider that is willing to sell it without a prescription.

Synthetic HGH has Many Risks

The greatest risks with any form of HGH treatment comes from synthetic HGH. The full effects of synthetic HGH are currently being studied, but it is thought that this type of HGH treatment can lead to several long and short term side effects including carpal tunnel syndrome, nerve, joint and muscle pain, high cholesterol, tingling in the skin, and fluid retention. The long term effects of synthetic HGH use are unknown but some medical professionals believe that it can increase a predisposition to chronic illnesses such as diabetes. The short and long term side effects of synthetic HGH use are avoided with Sermorelin therapy, while the positive health benefits that come from restoring youthful HGH production levels are maintained.

Sermorelin results in a safer increase in hormone production

Any form of HGH therapy that involves directly injecting the hormone in the bloodstream will cause a rapid and unnatural rise in tissue hormone levels. The full effects of this are unknown, but it is likely that many of the short term side effects that are seen with synthetic HGH production are the result of this rapid increase in hormone availability. The body does not produce HGH naturally in this way at all. Sermorelin therapy avoids the need to inject the hormone itself, because the pituitary gland will start to produce more of the hormone gradually through the body's natural mechanism, and the tissues and organs will not be flooded with the hormone. The hormone is delivered to the tissues through the body's natural mechanism, and as a result, tissue concentrations of the hormone usually increase just as much if not more than direct injections of the hormone.

Sermorelin can be an effective way to restore youthful levels of HGH production, but the treatment needs to always be administered by a licensed medical professional in order to be safe. The unlicensed or overseas sources for this hormone treatments present the greatest risk to patients and they should be avoided altogether, even if they are lower priced. For more information about our Sermorelin therapy program, click here.