CJC 1295 Benefits, Side Effects, Dosage,With and Without DAC, Where to Buy 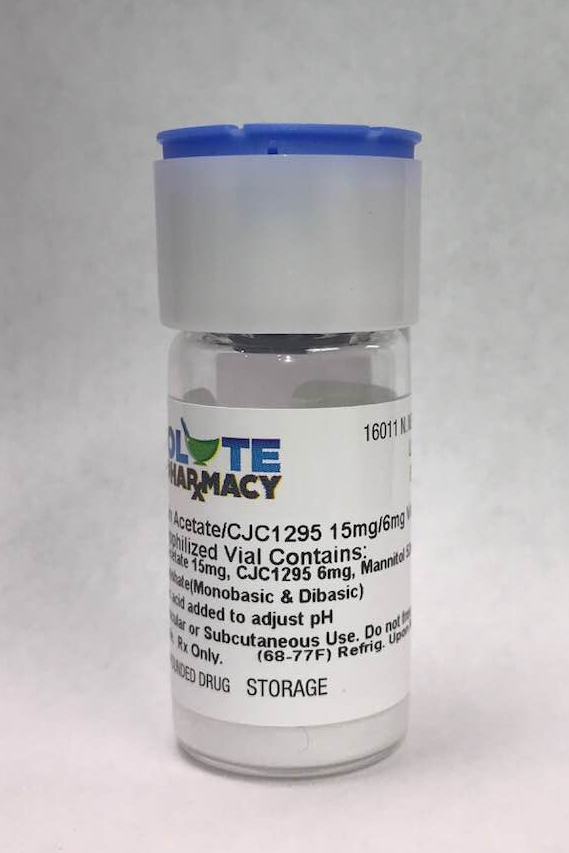 You've obviously made it to this page as you are aware of CJC 1295, and other Growth Hormone Realeasing Hormones options. If you are contemplating use of CJC 1295, and simply want a little more information prior to starting a dosage cycle, we have the answers you are looking for. Below we will detail the uses, dosage, benefits, cycles, and other relevant information you will need to know, if you are new to this, or other GHRH's for that matter. So, here's what you want to know, when you are ready to start your CJC 1295 cycles.

What are the benefits of using CJC 1295?

If you want to increase muscle strength, increase lean muscle mass, and lose body fat, look no further. With CJC 1295, these are only a few of the benefits you are going to realize, from your very first injection. The long-lasting, GHRH analog, has a longer lifespan than other growth hormones. In turn, it is working longer in your system, meaning increased benefits, and an increase in dispersion of the growth hormone.
In addition to the above listed benefits, it also promotes several therapeutic benefits to users. Fewer injections are required than is the case with competing growth hormones. When you compare CJC 1295 to other growth hormones on the market, you will realize a difference in quality, and you will notice an instant jolt in energy levels, among the above listed benefits.

Subcutaneous injections are suggested. Simply use an alcohol wipe to the belly or thigh, and flick the syringe (to release water) prior to injecting. Gently insert the syringe until the vial is empty.

When it comes to supplements and injections, there is always a risk for side effects or certain complications; when using this CJC with DAC, the most known complained of side effect is the increase rate of release in the pituitary gland. Increase in vasolidation is often complained of with some users, as the surge of growth hormone is directly injected into the system. This can last anywhere from 30-minutes, up to 2-hours post-injection.
Soreness, pain, itching, and swelling, are some of the often complained of side effects; but, this is more so because of the injection, and not the actual growth hormone. Your HGH levels will also rise. But, the side effects which include increased muscle mass, lean muscle tissue, and reduced body fat, are beneficial, rather than negative side effects you will realize. With proper diet and exercise, you will see these side effects even further enhanced with routine use.

Cycling: How should I use and administer CJC 1295?

Most have noted that 2-3 injections daily, is going to allow for the best dispersion, and release in the system. Prior to breakfast, at lunch, and prior to going to bed, are the times most users will inject; testing periods can last for several weeks, until you find out what works best for you, and how the CJC 1295 is best going to acclimate in your system with regular use.
8-days is the half-life of DAC, and this is the reason duration of cycles should last less than this amount of time. Increased GH secretion will be noted with injections given once weekly. So, it is really a personal preference as to what you like better, the once weekly injection, or 3-4 injections daily with CJC 1295.

GHRP 6 (or growth hormone releasing peptides) are often used with CJC 1295 for the synergistic effects. If you are on a weekly cycle, you will use the GHRP once a week with that cycle. This causes less of a cortisol rush to occur; you can also use it on the 2-3 injection cycle, alongside the CJC 1295, if this is the preferred method of administration when you are using these injections.

With adolescence, the body finds it harder to produce growth hormones on its own; since 1985, when HGH was created, it has been a staple in helping adults increase the levels of GH they produce naturally. Studies have since been conducted which show how HGH has helped increase muscle mass naturally. It also decreases body fat levels in some users; but, for many who aren't prescribed the injections, the high cost makes it unattainable for some users.
Using CJC 1295 once weekly, has been shown to increase gh by 2 to 10 times naturally in the system, for a period of up to 6 days post injection. With IGF 1, a 1.5 to 3 time increase is also present, for 9 to 11 days post use. Whether you seek the "fountain of youth" or simply need a jolt of energy, this might be the solution you've been looking for as a athlete. It is not only easy to administer, it is going to continue to work in your system, post administration of the injection, so you know you are going to feel those benefits for a number of days after you initially inject the CJC 1295.

By adding DAC, you are basically extending the half life of CJC 1295. This is increased by up to 1 week, so you are going to notice the benefits for a longer period of time after injection. Growth hormone increase is an immediate benefit of longer half lives, and when you combine with ghrp, it is going to continue to work throughout the day and nighttime hours. So, your body is going to truly get the rush of all growth hormones, and benefits they promulgate.
Improved skin immunity, more energy, leaner figure, and greater internal organ mass, are a few of the benefits you are going to realize once you begin with your injections. When incorporated with a healthy diet and exercise plan you will realize:
- Leaner mass and lower body fat.
- More energy for sustained periods of time.
- Improved complexion and skin elasticity.
- Increase in strength, and less recovery time required post workout.

This is basically the equivalent of taking a modified GRF-129. It is okay for some; but, if you are truly looking to increase production of gh levels, not only during the day and post injection, but for several days at a time, the increase of the half life, is going to come when you take the CJC 1295 with DAC. This is the best way to ensure the optimal release of gh levels, and to reap the benefits of using the product for a prolonged period of time, with a healthy diet and exercise regimen.

The sterile, non-pyrogenic injection is safe for use. It is to be used for reconcentration with water, via an insulin syringe. It should be administered with 2 mg CJC per vial, with each injection. When using .5 ml of water, a 2 mg dosage is achieved. 2-mg dosage should be administered once weekly, for the best results in users who want to increase energy levels, and want to reap the benefits which are promoted by CJC 1295 use.

With CJC 1295, and any injection, it is important to follow proper dosage for safety, and to achieve the best outcome. Depending on whether it is morning or evening, the injection dosage is going to vary for each individual. When using with DAC 600, this should only be administered once per week.

GHRP-2, 6, or Ipamoreline: Examples for injection use

When doing a nighttime injection, it is best on an empty stomach, to avoid possible issues with drowsiness. You will take it 2 to 3 hours after your final meal of the day; post use, it is best for you to go directly to bed, as it can possibly cause drowsiness, especially to those who are new users of the injection.

In this example, you will inject 100 mg the first thing in the morning, on an empty stomach. You should not consume beverages or food, including coffee, up to 20 minutes after you initially inject this syringe.
When it comes to CJC 1295, and other gh hormones, there really is little to be questioned, and very little error in terms of dosage and use. As long as you know what to avoid, when to take it, and what to do after you inject, you are going to realize the instant benefits, and you are going to see a great deal of improvement, immediately.

1. "I added CJC 1295 with DAC about four months ago." It has truly benefited me. It not only works great, it it truly legitimate.
2. "Greater muscle definition, leaner frame, and more energy." These were just a few of the benefits I realized, instantly, once I began to use CJC 1295 as a part of my training routine.
3. "If you seek an hgh injection alternative, you have found it here. CJC 1295 with DAC is superior, and it is truly going to deliver the results you want to see."
You've seen the reviews; however, it is also going to help naturally increase serum levels, and hgh, within 3 to 11 days after you inject. With a longer half life, this also means the CJC 1295 is going to work in your system, for several days after administration, so you are going to reap the benefits for a longer period of time after use. And, contrary to other peptides, it is not going to be affected by food times, or when you choose to consume your meals, when you are incorporating it as a part of a muscle growth or weight loss regimen.

The stimulation of the pituitary gland means you may notice water retention post use or injection. You can simply skip a dose, or you can modify the sodium intake during the course of the day, and this should remedy the issue of water retention if this is an issue for you. But, for most, if you choose the pre bedtime injection route, this is a simple way for you to avoid the retention, and still get the benefits you desire when using CJC 1295 with DAC.

Many will realize synergistic effects with use; a decrease in cortisol levels is possible in comparison to use with ghrp. You can use ipamorelin with stacked hgh, 2-3 times per week.
Research 200 to 300 mcg ipamorelin -
You will find it best to start lower, in order to avoid side effects. With a slower release, a prolonged period of release is possible, and there aren't any complaints of hunger as is the case with ghrp-6 in some users.

Head rush or headache pains have been reported by some users post injection. This is because of the release of hgh; with most, it will dissipate about 20 minutes post injection.

Is it superior to HGH?

Yes; CJC 1295 with DAC is superior. It has longer half life, greater release, and the results for most users are superior. And, it is cheaper, so you can't go wrong with this option.

Routine use, and proper dosage is imperative, regardless of the results you wish to achieve with CJC 1295. Consider possibility of drowsiness, headaches, and pain, before administering the injection. It is best to test nighttime use, to avoid such issues. If used with a healthy diet and exercise plan, the results you will see with day or nighttime administration, should be similar in most users.

Where can I buy it online?

First off, you have to note not all manufacturers are equal, and quality is of utmost importance. Make sure you order with a reputable online pharmacy provider, for best results and quality.
Nuimage Medical is licensed to sell CJC 1295, and we have the best REAL CJC 1295 you will find available.
If you are ready to order, or simply want a recap of benefits prior to use, simply click below. From there, you can order your CJC 1295, and you will instantly feel the benefits we have discussed above in this post.