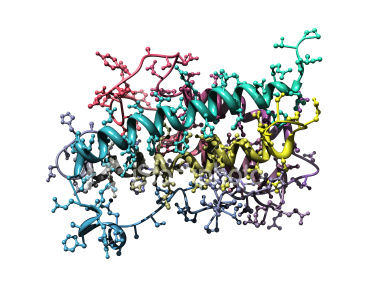 HGH (human growth hormone) is a protein composed of 190 amino acids that is produced by the pituitary gland, and is one of the most important hormones associated with aging. More specifically, the loss of human growth hormone which begins at the age of 18-25 and continues into adulthood is thought to contribute to several aging effects such as the development of wrinkles, an increase in body fat, decrease in muscle and bone density, and other aging effects.

Too much human growth hormone production results in a condition known as acromegaly which results in excess height, while too little results in a shorter height and bone length. Although the body may continue to produce the hormone, the levels may not be sufficient. For adults, the hormone serves important purposes throughout their lives, and without adequate levels of the hormone several aging effects can develop.

If an adult is low on HGH, they must be prescribed the hormone in order to replenish their normal levels. When the hormone is taken regularly it can reverse several symptoms of aging including wrinkles, muscle weakness, increased body fat, and other symptoms.

There has been some controversy over the safety of HGH treatment. Some think that supplementing with human growth hormone can lead to certain dangerous side effects, or that it has not been studied enough to guarantee that it is safe.

Although it is true that there have been limited studies on the hormone, the reality is that there have not been any major medical complications reported with Sermorelin supplementation, which is a precursor of human growth hormone and stimulates the body to produce the hormone naturally.

Sermorelin is used by Nu Image Medical as a human growth hormone treatment, and many other medical companies have also started to use Sermorelin because of its safety in comparison to straight HGH supplementation.

Human growth hormone therapy involves injecting the hormone itself, not a precursor, into the body. It is thought that this type of hormone therapy may have more complications because it is more difficult to control the levels of hormone that the body is exposed to.

When Sermorelin is used to produce human growth hormone, the hormone is transmitted by the natural pathways that the body uses to transmit hormones normally. By injecting it in the blood there is no way for the body to control where the hormone goes, and it may end up being saturated in some parts of the body but not others.

Also, the concentration of the hormone is regulated by the body when Sermorelin is used, but with a straight human growth hormone injection there is no way to control how quickly the hormone is delivered, since injections are instantaneous.

As you can see there are at least a few disadvantages to using HGH therapy as opposed to Sermorelin therapy, and it is thought that some of the negative attention that has been directed toward the hormone has resulted from treatment plans that inject the hormone directly instead of Sermorelin.

Other treatment programs may use low quality or synthetic hormones which may contribute to some of the negative side effects that have been reported such as carpal tunnel syndrome, excess dosage, abnormal bone growth, and a reduction of natural hormone production.

The most natural and safest way to increase your hormone production is through the use of Sermorelin. The treatment has shown to naturally and gradually raise human growth hormone levels without causing a reduction in natural hormone production and without the side effects that some people believe are associated with the treatment.

If your medical provider has determined that you need to start a hormone treatment plan, you might be considering buying it online to save money. Although there are a few medical providers like Nu Image that sell their products online, there are now thousands of online retailers claiming to sell products with real hormone in them.

Unfortunately, many of their products have unknown or potentially harmful ingredients in them, and many customers have purchased these products without ever knowing that they could be dangerous and harmful to their short term or long term health.

Any retailer that sells a hormone through an unknown pharmacy or from a foreign source may be selling a harmful product with or without even knowing it. You may also be wasting your money entirely because the product may not have any active hormone in it at all.

Also keep in mind that any product that claims to be homeopathic is pretty much guaranteed to have no active hormone in it, as these products are usually diluted to the point where there is no active ingredient in them, if there even was an active ingredient to start with.

To avoid any risks with your hormone treatment, be sure to purchase your treatment from a company that uses a licensed U.S. pharmacy to produce it such as Nu Image Medical.

Not everyone may need to take HGH as a supplement, and licensed medical providers can perform an evaluation to determine this called an anti-aging consultation. Typically, the patient will receive a detailed analysis of their hormone levels, nutritional assessment, a body fat analysis, and other tests as required.

The patient may be asked a detailed medical history, and any contraindications to hormone treatment will be noted. There may be other aspects to the anti-aging treatment that are included in the consultation depending on the medical provider. Some patients may be advised to use an alternative therapy due to potential health concerns, while the majority of people are usually approved for the treatment barring some significant medical condition.

At Nu Image Medical we perform a medical evaluation of every patient before we start them on a Sermorelin supplementation plan which includes bloodwork at the start of the program. The proper dosage of HGH will be determined after bloodwork is performed, and you will be able to ask licensed medical professionals any questions that you have about your treatment program. Being able to speak with a medical professional is very important when using a hormone therapy program because you may need to self inject the hormone and you may have concerns about the treatment that can be addressed from a professional and educated perspective.

By choosing a licensed and professional provider like Nu Image Medical you can rest assured that the quality and the purity of the hormone will be guaranteed, and that the treatment will be perfectly safe for you (with the assumption that you pass the medical evaluation). With Nu Image Medical's supervised treatment program your medical history, current health status, current blood hormone levels, and many other details will be taken into account prior to issuing you a prescription for the hormone.