The Reasons For Muscle Loss As We Age (And What We Can Do About It!) 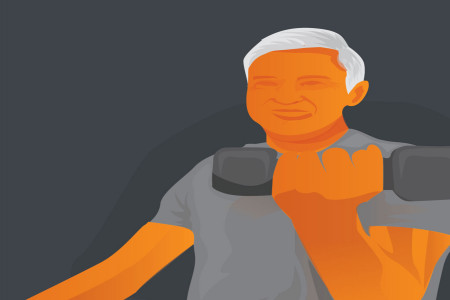 You're not making it up. It's not imaginary or caused by your fear of aging. You are getting weaker every year. It's a legitimate disease and it's called sarcopenia.

Sarcopenia is a fancy way to say you lose muscle as you age. It happens to about 10% of people over the age of 50. Even Hulk Hogan or any other very strong person who made a career with their strength isn't immune.

But that doesn't mean you can't fight back and make your sarcopenia bow to you - at least a little. There are new supplements, specific types of movements, and even diets that will help you win in the fight against muscle loss.

For example: ipamorelin and sermorelin, but more on that later. Now, let's look at the reasons for muscle loss and how to catch it early.

It's unfair to say that muscle loss only affects the elderly since people at the vibrant age of 50 can start seeing effects. It is fair to say, however, that Sarcopenia gets worse as we age.

If you start seeing effects at 50 and don't make changes, you'll be much worse by 60 and so on.

The first step to preventing something is to understand its triggers.

Sarcopenia happens when there's an imbalance in muscle cells. The cells that tell the body to create more muscle tissues are fewer than the ones that say to tear it apart.

The scientific words for these processes are anabolism (growth) and catabolism (tear down). Our bodies naturally balance these two cycles, but sarcopenia throws them off. Instead of your body balancing the cycle, the signals for catabolism get stronger, without the same anabolism signals to match.

When the process starts, you can expect to lose three percent of muscle mass per year.

The Reasons for Muscle Loss as We Age: What Brings It On?

Since you know only 10% of people experience Sarcopenia, the next question is, why? Some of it is genetic and we have no control over it. But there are a range of factors we can control if we're proactive.

Learn about both below.

Perhaps you've seen or even attended one of the thousands of "Silver Sneakers" type classes at your local gym. These are group exercise classes geared to and appropriate for people of an older age.

And they're everywhere. It's hard to find a gym that doesn't have some sort of targeted program for aging. It's not just a marketing ploy - there's a good reason.

Having a sedentary lifestyle before and during the aging process (let's say after 50) can cause Sarcopenia. It can also shorten your life, make your heart weak, and a host of other issues.

Movement does good things for the body - which is why you'll find exercise suggested on every single "how to prevent" list on the internet.

You don't have to be slamming things around in CrossFit to get the effects. Brisk and consistent walks (with dumbells if possible) are enough to keep your muscles happy. That's the keyword - consistent.

Everyone has lagged in workouts, but try not to let them last more than one or two weeks (unless you're injured). When you're not working your muscles, they begin the process of catabolism.

They break down and then starting where you left off doesn't just seem harder - it actually is. The process of breaking muscle down and trying to do the same amount of activity with less makes you tire out more quickly.

That's a vicious cycle which makes you not want to go back to the gym, even though that's really what your body needs. See how people can get caught in a vicious cycle?

Cause 2: Not Enough Protein or Calories

As people age, especially in the 70+ age groups, they're unable the keep up with the diet they used to. Even if someone loved cooking healthy meals and made a habit of it their whole life, fatigue can get to them.

Not only does age make people unable or unlikely to cook as often, but it also decreases their metabolisms. So even if the older person did create and cook a healthy meal, they wouldn't be able to eat as much as they used to.

And if there are any issues with digestion or tooth loss/decay. that exacerbates the problems even more.

All that to say - many elderly people aren't getting enough calories or at least enough calories with high nutritional value. That doesn't give their body any extra energy to feed or create (anabolism) more muscle tissue.

Along with the lack of growth, underfed bodies will break down fat and muscle to create energy. So you're not only unable to build new muscles, but you're increasing the breakdown of the ones you currently have.

Increasing protein intake, if nothing else, is a good way to combat muscle loss. Those over fifty should aim for 30 grams of protein a day, but it varies based on body type and size.

Remember how we said exercise is on every prevents ___ article on the internet? Well, stress is on just about as many "causes of ___" lists.

Stress is like poison in the body. It causes the body to work harder at its natural processes, usually unaccompanied by any extra resources. It increases inflammation, decreases the immune system, and can cause just about any negative side effect you can think of.

Many sites and sources would tell you to avoid stress altogether - but it's not that easy. From family issues to finances to the decreases in ability as we age - stress is inevitable.

The best way to combat the effects of stress is to find a good management strategy. Some people find exercise is enough. Others look into and invest in meditation.

Card games and even laughing with friends count as stress management methods.

Whatever the way you deal with stress is, it needs to be consistent and work for you.

The Fight Against Sarcopenia

Finally - some good news. Now that you know the main causes, you can integrate more exercise and better nutrition into your life. But is that enough?

For many people, unfortunately, it's not. They need to turn to other methods to prevent further muscle loss.

And thankfully, with modern technology, there are many. Growth hormones are a well-researched solution to slowing muscle loss with age. They're responsible for balancing out the unbalanced muscle growth/breakdown system that's characteristic of sarcopenia.

Have you ever heard about athletes taking something called "HGH"? It's not a steroid, at least not of the illegal and typical kind.

HGH is short for human growth hormone, a natural substance our bodies make. It was responsible for all those growth spurts you went through as a child.

It's also involved with the creation of muscles, or anabolism. As we age we naturally produce less and less HGH. We produce close to none after the age of 50.

So what's the solution? We re-up our bodies with some key HGH peptides. The two most popular ones are Sermorelin and Ipamorelin.

You can learn more about each here.

When you take both or either of these peptides, you'll see more than just muscle preservation. It will seem like all of your physical processes are getting easier.

You may even find you burn more fat and have a better appetite. Among other things, these peptides: increase performance, increase HGH levels, strengthen your immune system, give you better sleep, and help you create lean muscle mass.

Those are some powerful results from two measly peptides.

Along with all that. it can regulate other hormones that co-exist in the pituitary gland (where HGH is made and stored). Some people use it to treat low testosterone or to help increase metabolism to lose weight.

And yes - while older adults benefit greatly from the peptides, they can help adults of any age.

Finally - the peptides are much cheaper than getting injections of HGH alone. It's like the difference between providing your body with the fully built building (HGH) or providing it more building blocks so it can make the building itself (peptides).

Where to Go for Peptide and Sarcopenia Treatment

If you suffer from Sarcopenia or simply want to give your physical activity a boost, you don't have to go far. Many medical spas and IV centers offer these peptide injections.

You can fight the reasons for muscle loss as you age - and we're ready to help!

If you're in the Tampa, FL area, then you won't have to go far at all. Our medical clinic is located at 1209 N Tampa Street. We offer monthly packages and consistent professional care you won't get anywhere else.

Make an appointment or call us to talk about your muscle preservation today!