5 Signs You're Addicted to Bodybuilding 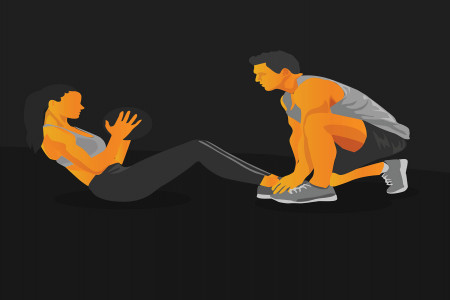 Most people understand addiction when it comes to a dependence on substances, such as alcohol, nicotine, illicit drugs, or even prescription medications, but they have a hard time with the concept of a weight lifting or bodybuilding addiction.

Addiction is about escaping something. You can become addicted to anything, so why not something that seems healthy at the start? Exercise releases endorphins which feels good, and insecurities experience a boost when your peers start to notice positive changes.

One man felt small and puny. He began to lift weights and exercise obsessively at the gym. One of the trainers told him he could have killer biceps and a six-pack by the end of the year. That’s all it took for him to become hooked.

He developed an injury that made it painful to lift weights, but he couldn’t stop. Over time, weight lifting became an obsession that took over his life. He couldn’t leave the house without lifting first, he dropped out of school, lost contact with his friends, and started using a steroid cycle to bulk up faster and bigger.

"Buddies at the gym started congratulating me and recommending ways I could build more muscle mass. I starting going at it hard. Really obsessing over it. I’d wait to see who would notice my body changes. Validation was a huge motivation for my addiction. "

Insecurity is a beast that only gets hungrier as you feed it.

When an addiction is slowly turning you into a sculpted Greek god, your loved ones aren’t typically clamoring to get you into rehab. From an external perspective, it is not the same as battling substance abuse, even though it can be just as harmful. In fact, many bodybuilders don’t even realize they have a problem until it has completely disrupted their life.

So, how can you know if your enjoyment for the sport of bodybuilding has crossed the line into addiction?

“I convinced myself that building up my muscles was going to make everything better. I couldn't quit. Being just ‘toned’ was my new scrawny. I needed to get bigger and bigger, but always felt miles behind. Every time I looked at myself, depression would creep in. So, I’d add extra time to my workout regimen."

Body dysmorphia is a significant struggle among bodybuilders, both men and women. This is when a person never feels unsatisfied with that they see when they look in the mirror. The self-perception of their body is negative and vastly different than what others see.

Many bodybuilders have confessed to struggling with depression and anxiety, both of which are rooted in their negative sense of self. Validation becomes a drug that curbs their mental health battle in very short increments, but also heightens their mental struggle when it goes missing. Psychologists say that getting hooked on compliments is often the initial driver behind bodybuilding addiction. It can feel like a quick cure for mental health issues that, in reality, need to be addressed in therapy and not at the gym.

Beneath those bronzed, bulging muscles and bedazzled briefs or bikinis is a body that is possibly dehydrated and exhausted from months of restrictive dieting and training. The repetitive cycling between bulking and leaning out wreaks havoc on hormones in both the short and long term. For women, it can disrupt the menstrual cycle and cause fertility complications. Male competitors are also at risk of hormone disruption, including testosterone — which can drop in the leaning phase, leading to fatigue and a low sex drive.

There’s a limit to the human body’s adaptability. Addiction to heavy, high-volume strength training can easily take the body over its limit, particularly when coupled with restricted bodybuilding-style eating. Bodybuilding addicts may experience gastrointestinal problems, immune disturbances, low libido, and a number of other health issues.

"I was actually fired from my job because of all the time I spent powerlifting at the gym. I started rationalizing being an hour late for work. When I was let go, I told some of the other guys at the gym. One of them shrugged and told me my job was holding me back anyway. The crazy thing was that, at the time, I believed him."

Getting fired because of spending too much time working out is surprisingly common among bodybuilding addicts. Home, school, and work all interfere with the rigorous training schedule, which is a top priority. Many employers also don’t want to hire men with huge arms.

"My parents gave me money when I was in between jobs. They wanted to help me pay my bills and buy food. Instead, I spent most of it on bodybuilding supplements."

Impaired control is a facet of a more generalized failure of behavioral control. Someone may feel like they are in control, but in reality, their addiction controls them. When bodybuilding addicts aren’t working out, they are thinking about it, planning for it, or spending their time, money, or resources obsessing over it. They make (often times risky) decisions based on their preoccupation with bodybuilding.

"To get as big as I wanted to get, I used steroids. They made me feel incredibly strong and powerful. I liked to play heavy metal music while I injected myself. I’d hit the wall with my fist and scream my face off.”

Steroids are common in bodybuilding. According to studies, 1 out of every 5 bodybuilder uses them. But, steroids can produce a variety of psychological effects ranging from euphoria to hostility. Some people who take steroids say the drugs make them feel powerful and energetic. However, steroids are also known to increase irritability, anxiety and aggression and cause mood swings, manic symptoms and paranoia, particularly when taken in high doses. High doses, especially when taken orally, cause nausea, vomiting and gastric irritation. Other effects include fluid retention and trembling.

Addiction to steroids differs from many other drugs in that tolerance to the effects does not develop. However, some people who abuse steroids meet criteria for drug dependence in that they:

After a cycle of steroids, there is a need for a “cooling-off” period called post cycle therapy (PCT). The three main drugs used during PCT: Clomid, Nolvadex, and Human Chorionic Gonadotropin (HCG).   See A Beginner's guide to PCT here.

"I expected women to ask if they could feel my muscles. Instead, they went out of their way to avoid me. I’d go out to a bar and try to start a conversation with a beautiful woman and she’d take one look at my arms and say, 'compensating for something?' Turns out, even though I was a typically shy and gentle person, most people were scared of me.”

Gorilla-sized-arms can make it difficult to get hired for a dream job. They can also scare children and turn off the opposite sex. What started as a means for feeling better and having more confidence in social interactions quickly turns into the very thing that causes isolation and social limitations. Bodybuilder addicts find it easier to just associate with other bodybuilders. Besides, the bulk in their arms and legs make it nearly impossible to fit into normal clothing and going anywhere other than the gym no longer feels worth it.

This is not to suggest that all bodybuilders are addicts, of course. Millions of people have pursued the sport without getting sucked into an obsession that ruins every other aspect of their life. If you feel like you’ve crossed the line into addiction, consult with a qualified psychologist and/or seek medical assistance.

*Personalized statements throughout this article have been generalized based on conversations with real bodybuilders. Information was changed for confidentiality and to assure continued dialog in the future.

At Nu Image Medical, we want you to be the best version of YOU. Schedule a telehealth consultation to discuss how to safely pursue your bodybuilding goals. We will ask you a set of questions that our medical team has put in place to provide you with the best care and treatment options possible. Once you complete our exam, one of our U.S. licensed doctors will review your information and make any recommendations we can to move you toward optimal health and wellness.