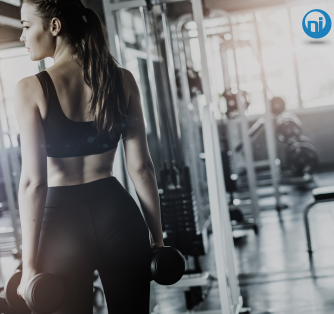 No one likes having belly fat but figuring out how to get rid of it can be complicated. Having less belly fat is associated with being stronger and having less chance of developing heart disease as well as being less prone to injury. Plus, everyone sees a flat stomach as looking better and being more attractive.

The first type, called subcutaneous fat, is a soft fat layer that is just under the skin. This type of fat is considered mostly harmless. However, there is a second type of fat that is far more dangerous. Visceral fat is fat that you can't see from outside the body. It is located around abdominal organs. This fat has been shown to increase patients' risks of getting diabetes, heart disease, and even cancer. Losing both types of fat will make your abdomen flatter, and both types can be reduced through diet and exercise.

Why is there so much focus on belly fat? Aside from it making serious diseases more likely, it is also metabolically active. It interferes with a lot of functions in the body. It creates several types of inflammatory chemicals that interfere with certain hormones that are in control of mood, appetite, and even brain function. This fat can also affect your levels of cortisol, boosting your level of stress. To look better and feel better, that belly fat needs to be reduced.

There are many types of exercises, and many people believe that abdominal exercises, like sit-ups, are the only ones that can reduce belly fat. However, it's not possible to spot-reduce the fat. Abdominal exercises can better tone the abdominal muscles so that they're tighter and appear flatter. This can help your stomach to look flatter, but it doesn't get rid of the fat that covers it. The best idea is to do exercises that both burn fat and engage the abdominal muscles to flatten the area.

This exercise works all of the major muscle groups, and it is especially good for the core muscles. To do this one, hold two weights above your head and then do a lunge, keeping the weights in place. To do the lunge, step forward with one leg and then drop to the ground so that the back leg's knee is on the floor. As you move to do the lunge, the muscles needed to keep the weight in place will change.

This allows this exercise to work every muscle in your torso to keep the weight upright. It also uses your gluteal muscles as well as your back muscles. This helps even more toward a flatter stomach, as weak gluteal muscles and rounded shoulders can make the stomach look larger. Once you've done the lunge, get back onto your feet, and repeat the exercise with the other leg. Do two reps of 10.

This exercise has gone by several names, but it's a great fat burner no matter what it's called. It works the entire body, strengthening muscles and burning fat. Working as many muscles as possible is a key to burning fat, and this hits them all. A burpee is essentially going from the position of a pushup, standing up and jumping, and then back down into that position. You begin with your feet straight and about shoulder-width apart. Then, go down until your hands are on the floor, again shoulder-width apart. Do one pushup. Then, do the reverse motion and get to a standing position, then jump once. Doing 10 of these quickly can help to boost your metabolism to burn fat even faster. And once the fat has been burned away, the muscles under them will be tight and toned.

Most people don't have a medicine ball at home, but it may be time to get one. A medicine ball is relatively heavy and dense, forcing you to use a lot of muscles to handle it. Doing this exercise uses a lot of core muscles, making them all work together to achieve the motions. This is good for raising your heart rate as well as melting fat. To begin, hold your medicine ball up straight over your head, and set your feet about shoulder-width apart, Then, throw the ball down as hard as possible. The idea is to throw it hard enough to make it bounce back up to you. When it does, grab the ball and do it again.

This exercise is a powerful one for cardio work, and it's great for fat burning and raising the metabolism. This one is done on an assault bike- an exercise bike that has pedals on the front wheel as all as having handles up higher for arm-pumping. This uses most of the muscles in your body, and it's a good way to work on your physical stamina. These bikes use variable resistance, and it takes some power to keep them going. Many people start out by working fast and hard on the bike for 30 seconds and then taking 90 seconds to rest, then repeating the pattern. After that, you can expand the time you spend pedaling.

Doing a sprint doesn't require any special equipment, and it can be done virtually anywhere that has enough space. It may seem old-fashioned, but it is a very effective fat burner, raiser of the heart rate, and boost to the metabolism. Just set yourself a specific distance to run as fast as you can, and time your sprint. Then, try to beat that time and set new records for yourself.

In addition to using these exercises, many people use the medication sermorelin to help them to burn more fat. It is a medical compound that structurally is much like the natural hormone that releases growth hormones in the body. It can act on the pituitary gland to cause it to create a larger amount of growth hormones and to release them to the body. When used in adults, it can be used to lose fat and to gain muscle mass. It will even raise bone density.

Studies have shown that being stressed about being overweight or obese can even further lower hormone levels, making it more difficult to lose the fat. There have been several studies of this drug, and it has been found that it has provided the body the stimulation needed to make more of this hormone and therefore decreased the amount of fat storage. Sermorelin reviews are often about its body-ratio benefits. It discourages the body from storing more fat and helps it to put on lean muscle. Some evidence also suggests that it provides a boost to the immune system as well as increasing the amount of collagen in the skin.

Using fat-burning exercises along with taking sermorelin can help the body to store less fat as well as get rid of the fat that's already there. It is recommended to take sermorelin for at least a few months to get its benefits. Some patients may require at least six to 12 months of using this medication to achieve their best results.